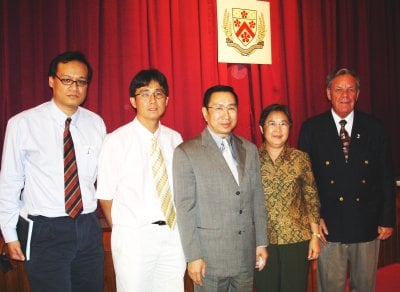 PHUKET: In a stormy meeting in the Dulwich International College auditorium this afternoon, the school’s CEO and founder, Dr Arthit Urairat, clearly failed to allay parents’ worries about the future of the school.

Central to the parents’ concerns is the relationship between Dr Arthit’s team and the franchiser, Dulwich College, London (DCL), with several parents making it quite clear that if the Dulwich name goes, so will their children.

In his initial presentation, Dr Arthit said that he was distressed about “a lot of rumors – all out of the blue”.

Addressing these rumors, he said, “We will, now and in the foreseeable future, not break with Dulwich [London].” He added, however, “We have had problems adjusting to inter-cultural management. The system they use in London… may not work so well at a school half a world away… so we have to modify.”

He also denied “rumors” that Dulwich would become a bilingual school. “It never occurred to me. It’s not true,” he stressed.

He attempted to lay the blame for the current problems on the recently-fired headmaster, David Cook, who had made an “inflammatory, unnecessary report” to DCL, criticizing the decision, finalized last week, to close down the “feeder school” on Koh Samui, and claiming low morale among teachers after they had been required to pay tax on housing and tuition for their children.

“These are petty things of detail,” Dr Arthit said. “We don’t understand why [they] should be reported to Dulwich in London.”

He stressed once again, “Now it has been cleared [up] – it’s a matter of technical detail how we can work out the problems together.”

In the ensuing question-and-answer session, however, when pushed for an answer as to how certain he was that the marriage between Phuket and London would continue, Dr Arthit said, “Ninety percent.”

For some parents this was not good enough, and they pressed for the CEO’s reasons for not bringing a DCL representative to the meeting, or for not postponing the meeting until Ralph Mainard, Dulwich College’s Deputy Master with responsibility for external affairs, could be present.

Mr Mainard was expected to arrive in Phuket this evening.

Dr Arthit said that he had been unaware until last night that Mr Mainard was coming, and added that he would not be able to meet with him because he himself had to fly back to Bangkok this evening.

However, parents were welcome to meet with Mr Mainard themselves, he said, adding that his representatives would be talking with the Deputy Master at a meeting arranged by James Batt, Joint Managing Director of Laguna Resorts & Hotels.

Clearly reluctant to wade into the situation, Mr Batt nevertheless cleared the fog by taking the microphone and telling the assembly that the relationship with Dulwich London was “a marriage in distress”, but that great efforts were being made on both sides to mend the relationship, with himself as “marriage guidance counselor”.

“A Phuket without Dulwich International College [would be] a poorer Phuket,” he added.

The newly appointed Academic Director, Dr George Hickman, in his presentation, stressed his aim to continue maintaining the school’s high standards. “There is no need to worry about discontinuance in any way,” he said, adding that his door would be open at any time to parents wishing to discuss their concerns.

“Give us a chance to show what we can do,” he pleaded. “The turbulence is not nearly as great as it appears from the outside… Leave your children with us.

“Do we need to improve our public relations?” he asked. “I think so. I need your help in healing the situation.”

An indication of how much healing will be needed was given by an emotional Debbie Cook, wife of the fired headmaster, who emphatically denied that her husband had compiled the damning report allegedly sent to London, and who detailed the less than genteel manner in which her husband had been removed from his post.

She said that after Mr Cook had declined an offer of three months’ compensation in return for his signature on a letter of resignation, the family had been given three days in which to pack and leave. Their car had been taken away, phone service and Internet access had been cut, and the locks on the headmaster’s office had been changed. And the family’s children had been barred from further education, she added.

In response, Dr Arthit pledged to pay Mr Cook four months’ severance pay and to allow his children to complete the school year.

The meeting finally dissolved after an appeal from Dr Arthit for patience on the part of the parents while efforts are made the resolve the dispute.