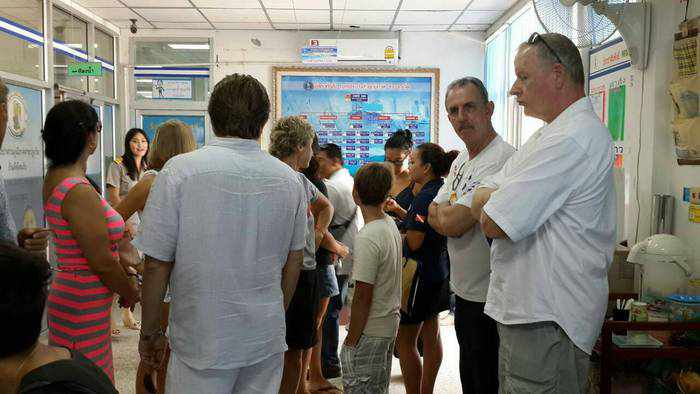 PHUKET: A group of angry residents from the Saiyuan Med Village housing estate in Rawai descended on the Phuket Water Authority (PWA) office at Bang Wad Reservoir today to demand action to fix their water supply.

Water supply had been intermittent since the start of the year, and for the past two months 55 homes in the estate have had no water supply from the PWA at all, said the complaint signed by Prawit Wiriyanorraanan.

Mr Prawit is the managing director of Sunshine Property Limited Partnership, the company contracted to manage the housing estate.

Each household affected by the lack of water supply had to pay 3,000 baht per month to have water delivered by a private company.

“They also had to pay a minimum fee charged by the PWA for the water meter,” said the complaint.

The complaint also mentioned that residents had questioned PWA staffers about the problem, but had received unclear answers.

“Nobody has come to fix the problem,” it read.

When called about the issue, PWA Manager Pisak Chonlayut confirmed that his staff had checked and fixed the problem, and that the water is running properly.

“I am in Surat Thani at the moment, but my staff called me about the group of foreigners, who I was told were mostly Russians, who had filed the complaint,” said Mr Pisak.

“The problem was due to a water pump. The housing estate is at a pretty high elevation, so the pump is sometimes not able to get the water to the homes.”

Although Mr Pisak confirmed that his staff solved the water shortage problems today, he said that he would check the pump himself tomorrow.

“I will be back in Phuket tomorrow and will check the pump myself to make sure there are no more problems with the water supply,” he said.

The complaint today listed three main demands for the PWA:

1. That the PWA describe the problem in writing, what strategies the PWA will use to fix it, and by which date the PWA expected the problem to be solved.

2. That the PWA repair old and leaking pipes at the entrances to some of the houses.

3. That the PWA take responsibility for the problem and take on the water meter fee for the residents experiencing problems.

Mr Pisak said that he was unable to address all these demands while out of the office, but added that anyone who continued to experience problems could contact him directly.