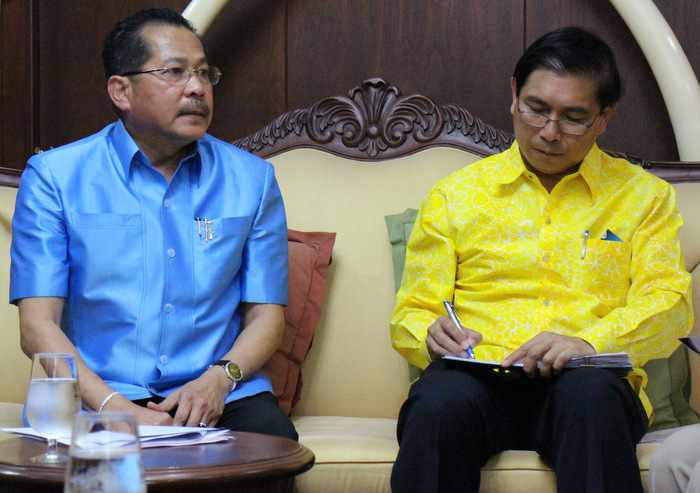 PHUKET: A legal loophole dating back more than 50 years may be just what those accused of encroaching on Phuket’s Sirinath National Park need to legally claim privately owned plots within the park’s boundaries.

The surprise was delivered to Governor Maitri Inthusut this afternoon by a Deputy Director-General of the Land Department, Thammasak Chana, accompanied by Phuket Land Office chief Somyos Lawchoo.

Mr Thammasak pointed out to Governor Maitri that if claimants had in their possession a SorKor 1 land use document for plots within the park, they may have the right to upgrade the document to full Chanote land title status.

However, this would apply only if the holders were issued the SorKor 1 documents before the National Park Act was proclaimed in 1964, and if the holders were not compensated for their plots when the government expropriated the land to form the national park, Mr Thammasak explained.

“Also, the holders must have been issued the SorKor 1 before 1954, which was the last year any SorKor 1 deeds were issued,” he said.

Mr Thammasak explained that if all those conditions were met, “then if the officers at Sirinath National Park cannot provide any evidence of those landowners having been compensated for their land, those landowners will have full rights to upgrade their SorKor 1 deeds to full Chanote.”

“We have come to Phuket to meet with Sirinath National Park officers and ask them to provide a list of all the people who were compensated for their land when the park was formed in 1964,” he said.

“The Land Department does not have any records of the compensation paid, so we do not know which landowners [sic] have been paid and which ones have not.”

Mr Thammasak accused the officers at Sirinath National Park of not providing this information to the Land Department.

“We requested this information from Sirinath National Park on September 11, 2012, but received no response,” he said.

Mr Thammasak explained that the Land Department felt compelled to take direct action following the nationally televised news that Sirinath National Park Chief Kitiphat Taraphiban was to file police complaints against three people who claimed they had rights to plots within the park.

“We have set up a special team to investigate the rights of the landowners [sic] in this case. We expect the investigation to conclude within 60 days,” Mr Thammasak said.

The “direct action” also follows the new Director-General of the Department of Special Investigation (DSI), Chatchawal Suksomjit, having earlier this month ordered the Land Department to hand over records and copies of land titles for plots along the border of – or allegedly in – Sirinath National Park.

“The DNP Director himself said he was having extreme difficulty in obtaining records from the Land Office,” Gen Chatchawal, a former deputy national police chief, told a press conference in Phuket on July 4.

“They said that we do not have the authority to ask for any land records,” said DNP director Samak Donnapee, sitting right beside Gen Chatchawal at the conference.

The esteemed law office of Tilleke & Gibbins, which has practised law in Thailand for more than 120 years, in its definitive guide “Thailand Legal Basics” (click here) describes the SorKor 1 as a land use document “which recognizes only possession and does not [convey or] imply ownership rights to a parcel of land.

“The certificate is nontransferable. However, a person in possession may transfer physical possession. This certificate is required for issuance of a Certificate of Use or Land Title Deed, and is most common in the rural areas.”

Considering the SorKor 1 is reportedly “non-transferable”, it was not explained to Governor Maitri this afternoon just how any persons could have one in their valid possession today.

“The people at the root of the issue of encroachment in Sirinath Park go all the way up to the top… people who are too powerful for local authorities to bring to their knees,” he told the Gazette.

One man killed, one injured in two fruit-picking accidents on Phuket