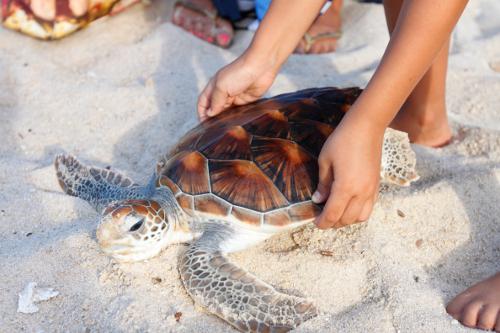 PHUKET: There comes a point in life when it’s time to let go… of some turtles. To help you do that, Laguna Phuket is hosting the 20th Sea Turtle Release event at XANA Beach Club next Friday from 4:30 to 6:30pm.

There will be 80 juvenile green sea turtles available for release (first come, first served). To release a sea turtle, guests can purchase a ticket for 2,000 baht. Each ticket includes two drinks, a chance to decorate one cupcake and a 15 per cent discount for a seafood buffet dinner at Xana Beach Club – kids under 12 years old dine for free.

Tickets are available at all Laguna Phuket hotel front desks.

Those just wanting to join in the festivities can do so for free.

In addition to the release, the event will include cupcake decoration, face painting, a balloon clown, a trampoline and snag golfing, as well as a magic and juggling show.

Organizers hope to raise over 200,000 baht to help fund conservation programs, as well as renovate the turtle pools at the Phuket Marine Biological Center (PMBC). To date, over 2.2 million baht has been raised through this event.

Officers from the PMBC regularly treat sea turtles that have been injured by boat propellers and fishing nets, or by eating garbage floating in the ocean (story here).