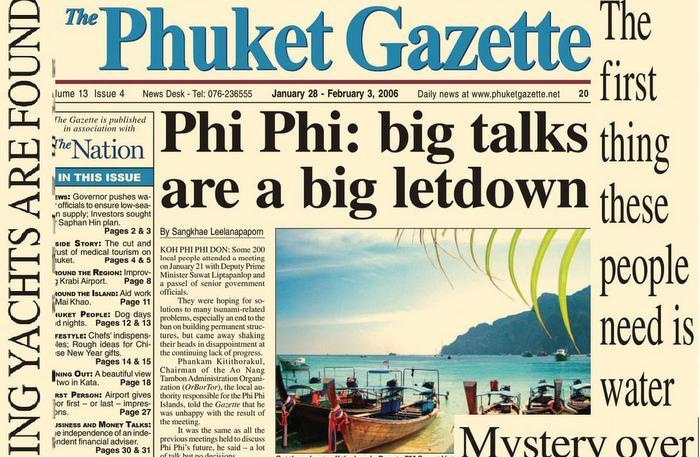 PHUKET: Similar to Phuket attempting to turn back the wheels of time on its beaches – by deeming some of the island’s well-trampled sands to be ‘virgin’ – a decade ago, officials were trying to ensure that Phi Phi Don remained an idyllic paradise island, following the destruction of most of the island’s man-made structures by the tsunami’s waves.

“We must turn Phi Phi back into a paradise for tourists, so there must be no more mooring of boats along the beach, as there is now,” said then Deputy Prime Minister Suwat Liptapanlop.

The statement was during a meeting with frustrated Phi Phi locals, who pointed out that the reconstruction of Ton Sai Bay pier, which had been given a budget of 200 million baht, had yet to even commence.

The locals left the meeting ‘shaking their heads in disappointment at the continuing lack of progress’. Now in 2016, with the pier packed with boats, the shore line obscured by long-tails, and the bay itself full of vessels – not to mention the ongoing construction of a shopping mall on the small island – perhaps having restricted the number of visitors by never rebuilding the pier would have been the best way to protect the natural environment of the island.

However, entire external hard drives could be filled with the woes of the Phi Phi archipelago, so let’s move to the meat of the January 28–February 3, 2006 issue of the Phuket Gazette: dead dogs and medical tourism.

Dogs first. Locals alleged that up to 100 soi dogs were poisoned by people driving a Patong Municipality garbage truck

The municipality denied that there was any official culling. However, the number of dogs on Phuket at the time remained a serious concern with the dog shelter overflowing and the Soi Dog Foundation doing its best to manage the population. Further into the issue, the Gazette spoke with Dog Pound Chief Panupong Banditsak, who had a job that ‘nobody wants’.

More than 400 of the island’s estimated 3,400 feral canines were being kept at the Mid Road Dog Shelter at the time.

“We feed them rice and dog kibble every day at 10am, but there just isn’t enough to go around. There are so many dogs; they are always ravenous,” Mr Panupong said. “They tend to fight over the food and once in a while a worker gets bitten in the dogs’ scramble to eat.”

It was desperate times at the shelter, especially as Mr Panupong could only expect the number of dogs to continue to rise, spreading the already distressingly low resources even thinner.

Glancing back to just last year, the measures being taken by Rawai Municipality to control the well-fed, friendly soi dogs in Nai Harn suddenly didn’t seem so dire. A decade of good work by the Soi Dog Foundation, the Phuket Animal Welfare Society (PAWS) and the local municipalities has paid off. And although there is still work to be done – at least there are no reports of mass poisoning, which took the idea of being as ‘sick as a dog’ after a night in Patong to a whole new level.

Although hospitals are intimately connected in our minds with sicknesses, there is, of course, a different face of the industry, which brings a lot of profits into the country.

As the Bangkok Hospital Group takeover of Phuket International Hospital and the re-appropriation of the new hospital building to be geared entirely toward aesthetic medical treatments, medical tourism is big, big money – and everyone knows it now. Although Thailand, especially Phuket, continues to be renowned for sex changes and boob jobs – take a stroll down Soi Bangla or visit any beach in Australia – the Bangkok Hospital Group is now shifting gears to also compete for market share in tertiary care.

Even ten years ago, the medical tourism industry was booming, with the Tourism Authority of Thailand having a special section of their website devoted to the market.

“Medical tourism is growing rapidly, so rapidly that we are expanding our hospital facilities to accommodate increased demand,” said Peter Davison, the manager of international services at Phuket International Hospital, in 2006. “Where else in the world is there a place like Phuket, where people can receive plastic surgery, have their teeth whitened and a new crown or set of dentures fitted, get a full medical checkup and then lie on the beach to recuperate and have a holiday in a tropical paradise before returning home as a new person?”

Even today, Mr Davison has a point, and although property investors and those in the tourism industry are giving Myanmar a wary eye, it’s important to not forget the enormous head start Phuket has on maturing its tourism markets. In fact, it would be foolish to assume that Myanmar and other destinations developing in Southeast Asia will not make some of the same mistakes that Phuket had to learn the hard way.

So investors, why don’t you learn a few tricks from the dogs on the island: heel, sit, stay… there are still plenty more treats in paradise.