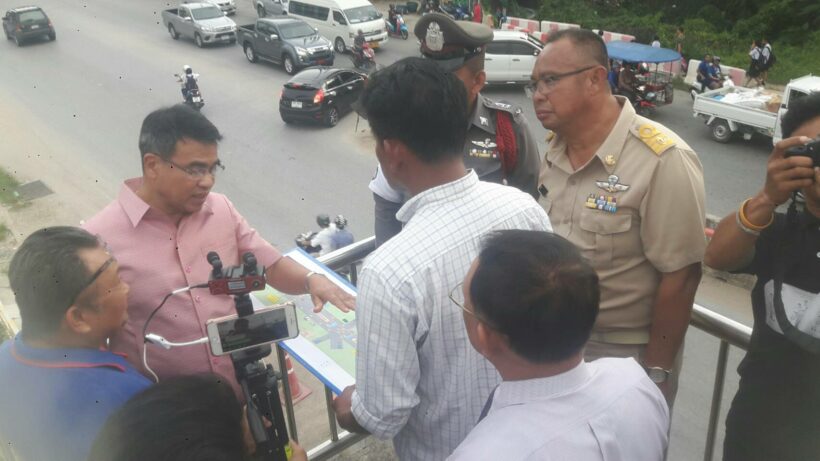 Yesterday (May 22) the Phuket Governor, Norraphat Plodthong, with a team of officials in tow, headed down to Chalong Circle to inspect the progress (or lack thereof).

Governor Norraphat says, “the Chalong Underpass is now 45% complete. Workers are now working to dig a tunnel under the actual Chalong Circle roundabout. So the roundabout will have to be closed and traffic diverted around the construction site.”

“The traffic path through the area will now change to a big oval (rather than a small circle). Vehicles will now have to make new U-turns in some cases to continue their journeys. Particularly coming out of Patak Road, there will be changes and the need to do new U-turns. Two more lanes will be urgently added before the current roundabout is closed. After that, retaining walls, the new road underground and a roof for the new underpass will be constructed.”

“The new traffic plans will make the underpass construction faster by diverting traffic away from the actual circle. The contractor is rushing the work schedule during this period especially over the low season as there are not as many tourists. More shortcut routes have been opened up with signage to assist drivers.”

Governor Norraphat said, “we are urgently trying to solve the transportation problems for the area as best we can. However we need cooperation from all road users whilst the works are being carried out. Safety is also very important. The Chalong Underpass is expected to be finished before June 2019.”