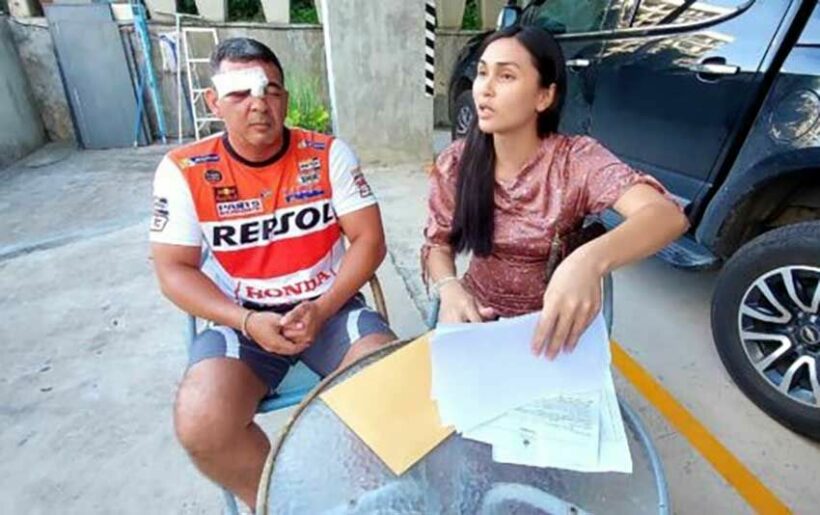 Police in Pattaya are searching for a foreign man wanted in relation to a violent assault on another foreigner at a local gym. According to a Pattaya News report, 46-year-old British national, Gary Reed, was assaulted with a dumbbell in a row over gym equipment.

The victim says that he was exercising at the gym when a foreign man started arguing with him over use of the equipment. It’s understood one piece of equipment was faulty and the unidentified assailant told Reed he was first in line to use the equipment that was working.

CCTV footage from the gym shows the man using a small dumbbell to attack Mr Reed in the head, as the British man was lying down about to lift weights. According to the report, the victim sustained injuries around his eye area, which required 60 stitches. The assailant fled the scene immediately following the attack.

Mr Reed has now filed a report with Pattaya Police and officers have confirmed they are looking for the unidentified suspect. Anyone with information is urged to contact police on 1337. The police are also urging the alleged attacker to surrender in order to “tell their side of the story”, according to the Pattaya News.

HolyCowCm
I think they need to catch the guy and question him. It could be the Brithish guy mouthed off to him in a way that was not flattering and perhaps he did cut in line. Who knows what really went…

Transam
1 hour ago, ExpatPattaya said: Don't you have to sign in or show a membership card to get into a gym?  Maybe police should look at the list of attendees in the gym  at the time- Duh Don't you need…
TSS
"Mr. Reed needs to sue the gym for letting the suspect go and tried to cover up."  no way that will happen-Thai tort laws aren't like the West. Reed would need to prove gym was directly responsible for his injuries. Just by allowing a…
Ramanathan.P
May be there could be some young girls also beside doing activities.....just to show who is the boss....the brawl might have ended up in an unanticipated accidental collusion

Poolie
The Police nicked him within the hour.