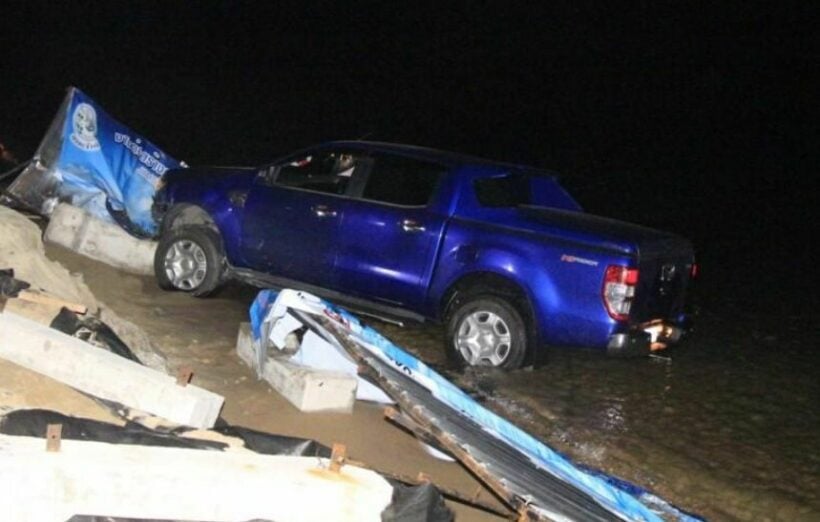 PHOTO: Stock photo of the truck that swerved into the ocean at Jomtien via Pattaya News

The driver of a pickup truck claims that he swerved to avoid an out-of-nowhere motorbike when his vehicle flew off the road and into the ocean of Jomtien, south of Pattaya, last night. Na Jomtien Police received an accident report around 8 pm last night and went to investigate. The blue pickup truck was asea and taking on water when police arrived. Although the truck was partially submerged, the driver didn’t sustain any injuries in the accident.

The crash occurred near a section of Jomtien Beach where sand expansion projects are in the works, and so the beach was sectioned off. The truck ploughed through several of these dividers for the planned renovation before reaching the shoreline. It hasn’t been confirmed if the driver would be held responsible financially for the damages to these barriers.

Mongkon Paterat, the 38 year old driver of the crashed truck, says that he veered off the road to avoid a motorbike that suddenly appeared in the road directly in front of him. He complained the road in that area was very poorly lit and he could not see any approaching vehicles in the darkness. When an expected motorbike, presumably without a headlight, came into view extremely close and on a collision course with his truck, the driver did the only thing he could do to avoid a catastrophe and swerved hard through the barriers and into the water.

His truck was towed to a local garage for repairs after a water rescue effort that took several hours to remove the truck from the sea. With no cameras in the area and no witnesses to the accident, police have been unable to verify the identity, or even the existence of, the motorbike driver who may have caused the crash.