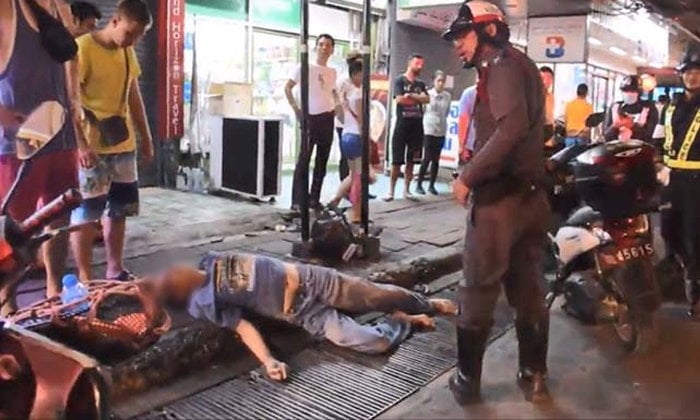 A Pattaya cabbie has flattened an unidentified foreigner, punching him in the face and knocking him unconscious. Police headed to Pattaya Soi 2 and found the 40 year old farang recovering next to the footpath after locals had dragged him off the road. Emergency volunteers treated him at the scene before transporting him to hospital.
For his part, the 46 year old taxi driver says he was driving a passenger when the man rushed at his taxi from the sidewalk, gesticulating then standing in front of the cab, blocking his way.
Getting out of the taxi to confront the man, the taxi driver says he was grabbed on the shirt and a fight between the two followed. It all ended with a knock-out blow from the cabbie to the 40 year old farang.
Police will be getting the two together to work out who was at fault when the foreign man recovers in hospital and is able to provide his side of the story.
PHOTO: Sanook

Crushed under an elevator at Patong Hotel