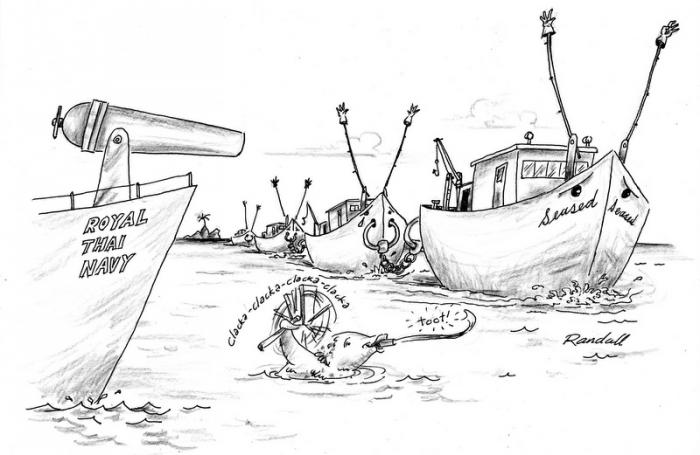 PHUKET: The hunt for the Taiwanese owner of a fleet of seven fishing vessels currently impounded in Rassada (story here) is a test of the willingness and ability of Thai authorities to tackle Illegal, Unreported and Unregulated (IUU) fishing vessels that port in Phuket.

Taiwanese tuna fishing vessels have a long history of using Phuket as a base of operations, which became increasingly important to the Taiwanese when migration routes of some tuna species were observed to have moved north in the Indian Ocean in the late 1990s. Typically in close cooperation with Thai shareholders, many Taiwanese investors have Thai spouses and maintain homes on the island. This might be a good starting point if investigators are serious about tracking them down – and they have good reason to be.

While Thailand’s issuance of a ‘yellow card’ by the EU in April 2015 made headline news in the Thai media, it is locally lesser known that Taiwan received a similar warning in October of the same year for its ‘distant water’ fishing industry, for which Phuket serves as an important base. As the name implies, the yellow cards serve as ‘last chance’ warnings to countries that allow their fleets to engage in IUU practices.

Failure to take better measures to reel in offenders could result in both countries being issued the dreaded ‘red card’, banning them from exports to the EU.

As a result, the government of Thailand imposed strict measures when setting up its ‘port-in, port out’ monitoring system in 2014. This was apparently enough for the EU to extend Thailand’s ‘yellow card’ status a year later, but it comes as little surprise that the recent seizure took place just a few months before the next EU ruling.

Taiwan issued a statement in November last year that it had established “a cabinet-level task force to combat IUU in order to complement global efforts to prevent IUU fishing and prohibit IUU fish or fisheries products from entering into the market”.

The sad reality is, of course, that bureaucrats in Brussels, Bangkok and Taipei are about as far removed as imaginable from the situations they seek to impact.

The seized tuna fishing vessels had been regular visitors to Phuket, despite having been fraudulently-registered as ‘Bolivian-owned’. This says a lot about the pre-existing situation because, after all, Bolivia is a mountainous, land-locked country more known for cocaine than cod or king crab.

Island View: Time to speak up