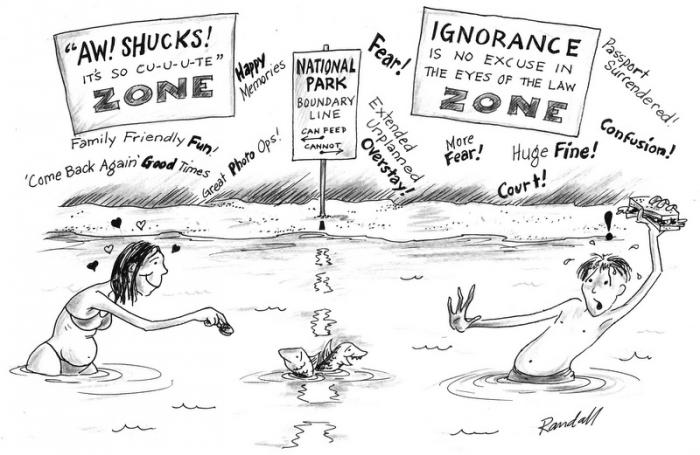 PHUKET: The recent incarceration of a Russian tourist for the heinous crime of feeding breadcrumbs to a fish is just the latest in a long-running series of embarrassments for Thai law enforcement and our tourism industry.

The story made international headlines, including such mass media heavyweights as TASS and the UK’s Daily Mail, re-reporting after it was first reported by the Phuket Gazette (story here).

While the reports created a feeding frenzy of their own in social media, it is perhaps fortunate that international reporting of the incident by mainline media was not more intensive than it was.

The tale of Ms Smirnova’s travails in Thailand certainly has the “that could have been me” narrative that reflects so badly on travel risks in any country. How many among us have never engaged in similar behavior when on holiday abroad?

Perhaps this report was lost in the expanding universe of propaganda, as well as more eyebrow-raising official announcements, such as the recent proclamation by a law enforcement official in Pattaya that there is no prostitution in that seaside town. How’s that for an alternative fact?

Coming back to the issue at hand, officials at the Department of Marine and Coastal Resources (DMCR) need to do a much better job of ensuring that tourists, and especially tour operators, are aware of existing laws that have been put into effect to help save what little remains of our coral reef ecosystems.

Most tourists who feed fish are not only unaware that the practice is harmful to fish populations in the long run, but are also clueless to the fact that they are putting themselves at serious legal risk. The fact that other foreign tourists have faced similar treatment by DMCR officials and police indicates the start of a worrisome trend.

If the intention was to ‘set an example’, the arrest is a failure because it will not be noticed by the vast majority of future package tourists who might be tempted into similar activities.

If the intention was to needlessly humiliate a random foreign tourist, spoil her vacation, elicit scorn and put yet another brown stain on our reputation as a tourist destination, then it was clearly a resounding success.

Ministry of Farang Affairs: Why Thai kids are scared