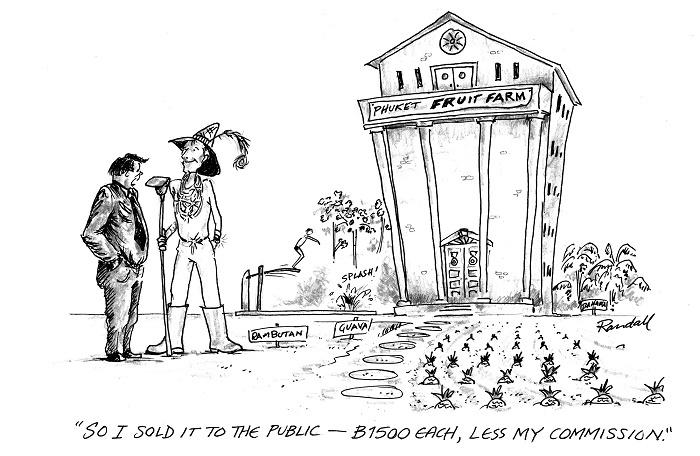 PHUKET: While the media narrative abroad regarding our Land of Smiles has focused on such lofty issues as democratic development, freedom of expression, human rights and so forth, it is somehow reassuring to know that here on the ground the saying plus ็a change, plus c’est la m๊me chose still seems to apply as far as daily life is concerned.

The phrase means ‘the more things change, the more they stay the same’. That certainly seems to be the case in Thailand.

A recent example comes to us straight from that bureaucracy of all bureaucracies, the Ministry of Interior. Phuket has once again been chosen as a ‘pilot province’, this time for the ministry’s Pracharath Rak Samakkee project.

This ‘Civil State Loves Unity’ (our translation) project is highly reminiscent of many other lavish central government projects aimed at the ‘grassroots’ of Thai society by previous administrations. The stated aim is to help small and medium-sized enterprises in three areas designated as strategic: agriculture, ‘product processing’ and community tourism.

Phuket might well be the most unlikely of candidates among Thailand’s 77 provinces to serve as the ‘model’ province for such a populist project.

For a start, few provinces apart from Bangkok have a smaller percentage of land under agricultural use. ‘Product processing’ is also rather hard to find here, unless one includes the crafting of everyday household objects into recreational drug-taking paraphernalia. And ‘community tourism’ is curious indeed, given the sheer number of package tours we suffer on a daily basis. The homebred population of Phuket is probably outnumbered by outsiders by a factor of at least 2:1.

Three months after its launch, the project is literally just starting to bear fruit. This comes in the form of 50 ‘homegrown’ Phuket pineapples, now on advance-purchase offer at just 1,500 baht each – somewhat over the going local market rate.

The price has been defended by the project team on the basis that a durian from Nonthaburi once fetched 210,000 baht. While it is undeniably challenging to argue with anyone who might deploy this type of logic, such reasoning does seem to be in the news quite often here in paradise.

But of course the real reason that Phuket is always and inevitably the first choice for pilot projects has little to do with grassroots development. No, it’s rather more tied in with the fact that our emerging Pineapple Hub is, at least in the eyes of the desk-bound bureaucrats of Bangkok, still the perfect island getaway from life in the big mango.