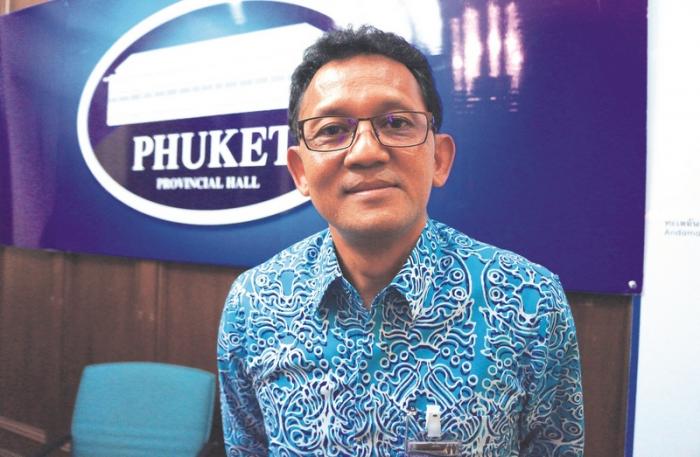 PHUKET: Phuket Governor Chamroen Tipayapongtada has been leading our island for a year. He is now leaving us to take up his new position as the governor of Nakhon Sri Thammarat.

Here is his last letter to Phuketians.

It has been a year since I took up the position of governor in my hometown. It has been a great year for me, and I have received immense support from both government and private sectors. I am thankful to everyone, as I could not have done it by myself.

If I have upset anyone during my tenure, whether intentionally or unintentionally, I apologize for that. However, please understand that everything I did was for the benefit of the people.

I have been back and forth to and from Phuket for several years. I started my career as a government officer here and also served as the vice governor from 2012-2014, before coming back to assume the position of governor last year.

One of my proudest achievements has been to return the beaches of Phuket back to the local people. This was also one of the toughest tasks I have had to deal with. Some of the beaches have been returned completely to their natural state, whereas at others we allowed some local vendors to earn a living. The prime objective here was to ensure that Phuketians got the maximum benefit out of it.

I trust the people of Phuket to continue following the 10 per cent beach rule. There are some pending beach matters that I cannot tend to in the few days I have left, so I will leave those for the new governor’s attention.

The beach clearance was a huge accomplishment. I was working against many people, especially those whose revenues were affected by it. Some people are not satisfied with what we have accomplished, while others don’t think it’s that big a deal. Please be proud of the beautiful beaches you now have – go out to see the beauty of Phuket and be proud, like I am.

Another important project we initiated is the Phuket Smart City project. This will help make the economy stronger and ensure a bright future for the island. The innovation park at Saphan Hin is already operational. This is a platform for the new generation to learn about technology and utilize it for their benefit.

We connected with many other cities to gain knowledge about smart cities and pushed very hard to make this project a reality. We have just started, whereas other cities are far ahead of us. However, it’s never too late to start, and in another year or two, we’ll be able to see worldwide, real-time footage of Patong Beach via CCTV. It’s a great concept to merge smart cities and tourism.

We plan to install CCTV cameras at the Tah Chat Chai checkpoint, so that we can scan every single car passing through there. The next step will be to scan people’s faces and install more CCTVs throughout the island, especially at the piers.

The plans for Startup Thailand have been finalized and presented to the central government. The project will cost about 4.2 million baht, and I believe in the PM for getting it approved.

Conceptually, the project is ready. I strongly believe that it will become a reality with the support of the central government. Safety has always been our first priority, so we have revised the plan to ensure that it is so. Even though it costs billions of baht to add more safety features, we cannot afford to be cheap. If we can’t get the best outcome, it’s better not to do it at all.

This will be Phuket’s premium thoroughfare, and I am happy to have got the ball rolling on it. I wanted the designers to come up with a safe and dignified road. This will be a signature Phuket road, so if you come to Phuket, you will necessarily travel along part or all of its 22km. All the wires will be buried underground. It will cost up to 20 billion baht, including land expropriation.

Four years ago, this was a huge issue on the island and nobody would even talk about it. I pushed very hard to get rid of them and took the initiative to solve the issue. We managed to get more than 5,000 drivers legally registered in the system.

The Phuket Provincial Hall building was constructed in 1913. We built a new reinforced concrete structure and I was fortunate enough to have a chance to work there as the 46th governor of Phuket. This is the first reinforced concrete structure in Thailand. Some people protested against the construction of a new Provincial Hall, as the building is more than 100 years old. However, we needed a new and more suitable building and the new hall serves that purpose.

We have been trying our best to resolve the land dispute between sea gypsies and land developers, and have escalated the issue to the relevant departments to take care of the locals and see what is best for them. It is also important to provide them with a means of earning a living by means other than fishing, so they can lead a good, healthy life. I have done my job, and now the rest depends on the central government and the courts.

In conclusion, I can say that I have done everything in my power to push projects, expand sister cities, and anything else I could do for the benefit of Phuket. When things were out of my power, I asked the central government to take charge.

The truth is, all these mega projects costing hundreds of millions, are out of my control. Everything gets decided in Bangkok, but as the governor, I had to take the blame. I am thankful to everyone who registered their concerns on delayed projects, as it is their voices that helped speed things up.

I reported the progress of all our projects, as well as plans for future projects, to the Prime Minister when he visited the island on September 16. I had nothing to lose, so I took the one shot I had. I wanted to make my voice heard in front of the PM and all the ministers.

All the provincial plans are in place and I believe the new governor will carry on the work very well. He is an honest and capable man. I speak from my heart when I say that I am worried about the facilities here in Phuket.

I would like to see Phuketians, whether they were born here or have moved here for work, love Phuket and take good care of the island. I also hope to see good cooperation between the government and private sectors, to help the new governor move Phuket forward.

I cannot be here forever. It is the government’s decision to move officers where they see fit. I do not mind working anywhere, as everything I do is intended for the benefit of my country. If anyone visits Nakhon Sri Thammarat, you are welcome to come see me in my office there.