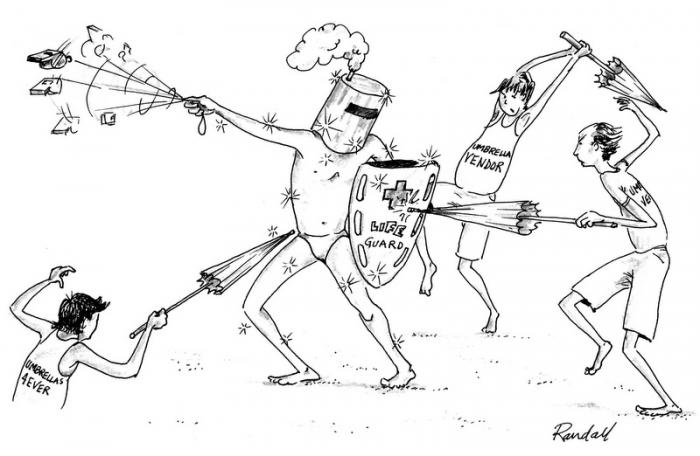 PHUKET: The lack of any significant official response to encroachment at Laem Singh Beach seems to indicate that those behind it are well-connected.

The fight to save our beautiful beaches from the forces of corruption is no doubt as relentless and difficult as that against global climate change.

The ongoing beach encroachment at Laem Singh is well documented and indisputable. Declared by the government as one of Phuket’s so-called ‘virgin’ beaches, the recent high season has seen Laem Singh once again privatized and monopolized by self-described ‘locals’.

We have been down this retarded cul-de-sac many times before. This time, however, is perhaps the most depressing because it comes just after a painfully necessary national ‘restart’ that has further detoured an already long and winding path to something resembling functional democracy.

Even as the country’s reputation was subjected to international scorn, bewilderment and embarrassment, the Phuket Gazette has always in this space recognized the need to bite the bullet and take the bitter pill, much like a cancer patient making the decision to accept chemo.

We were also encouraged by the fact that our island’s beaches were made a top priority by the national government in its ambitious, and we still believe sincere, effort to create a more civil society – of the kind that can actually sustain a functional democracy.

The ongoing encroachment at Laem Singh is a direct challenge to this effort and the progress it has achieved so far. To maintain an important precedent, the national government correctly took a stand against sun beds at Patong Beach. It might be possible that Laem Singh is a small enough strand to have remained off the radar so far, but we are now calling on the government to recognize and rectify the situation.

Remove all the clearly illegal beach furniture and give us back our lifeguards – and ban jet-skis while you’re at it, please. Do not allow thieves, thugs or scofflaws to rob you of your dignity.