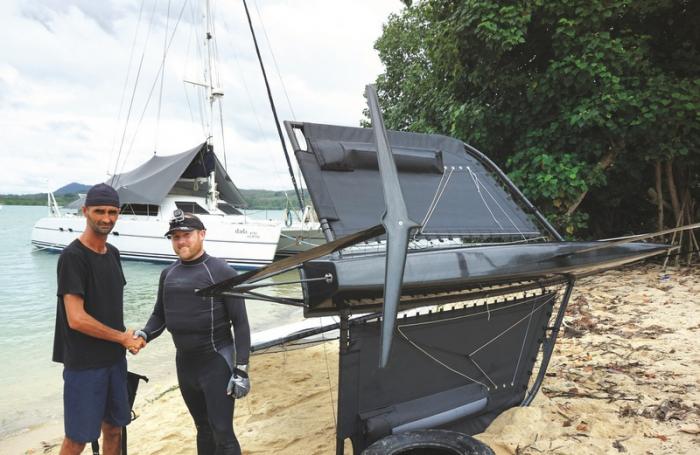 PHUKET: There’s a new bird in town that goes by the name of Shadow. Light as a feather and built entirely with carbon fiber, the Shadow is a Moth equipped with hydrofoils that allow it to ‘fly’ up to a height of at least 5 feet.

The idea of the ‘Moth’ dates back to 1928 when the first model of the development class was built. Following the standardization of international specifications, His Majesty King Bhumibol Adulyadej constructed three of his own designs, namely ‘Mod‘, ‘Super Mod‘ and ‘Micro Mod‘.

Yassine Darkaoui, the man behind this elegantly-designed craft, is one of many inspired by his work.

“What’s special about this type of boat is that it’s open source – hundreds of people build them in their houses,” says Mr Darkaoui. “It was a heavy wooden boat, but after about 90 years of development, now its one that can fly.”

“This is the first modern Moth built in Thailand,” says Mr Darkaoui.

In a warehouse located in a quiet part of Cherng Talay, surrounded by nature – a location many only dream of – the Shadow is built in line with international specs.

Measuring 3,355mm in length, with a beam of 2,250mm and sail area of 8 square meters, Shadow can fly with just six knots of wind and has two hydrofoils with their respective control systems, which allows sailors to control the sensitivity of the flap, height of the boat, the lift and the pitch. The flap system is connected to a sensor that controls the lift and gives a stable flight experience.

Mr Darkaoui was involved in numerous sailing activities in Tangier, Morocco, and moved to Phuket with his wife Adelaide Casta about 5 years ago. While he manages the development, team and design of the Shadow, Ms Casta makes sure her husband stays focused and on plan.

Mr Darkaoui goes back a long way when it comes to sailing. In 2014, he set a world record in Phuket for the longest distance sailed with a Laser – 77 hours non-stop.

“I have sailed for my country in many international championships, but I don’t have prior experience of building boats,” he says.

“The boat is in a permanent evolution phase, you cannot relax at any point in the process. The market is ultra competitive, and these boats are getting more and more popular ever single day. Moth racing is a worldwide sporting event, and I would like to invite people to help bring this exciting phenomenon to the Phuket King’s Cup Regatta soon.

“Once it is officially launched, it could bring in many more sailors, spectators and followers of the event. I’m also working toward making sailing more accessible to young people by investing my time and energy into a yacht club, along with handling everything else,” he says.