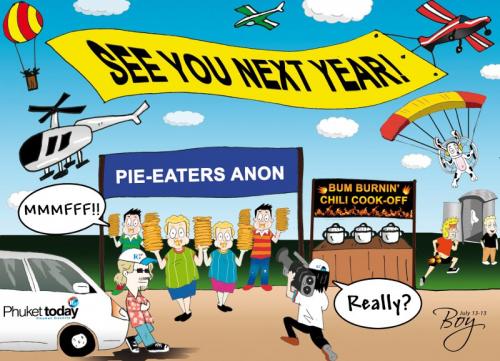 PHUKET: We would like to extend a most heartfelt thanks to every one of the many volunteer groups who worked together so well to make last weekend’s inaugural Phuket Airshow and Family Picnic such a successful charity event.

The splendid festivities, timed to celebrate the signing of the United States Declaration of Independence 237 years ago, had so much going on that it was almost impossible for attendees to take part in all of the fun activities, which included everything from stunt flying performances to pie-eating contests.

While it would be impossible to individually thank everyone for their contributions, a good place to start would be with the US Navy League and one of their key members, Pat James. The lifelong airman conceived the idea to celebrate the 4th of July in the way he remembered celebrating it as a boy growing up in Texas: with an airshow, complete with stunt pilots, a chili cook-off and other American staples.

While the event was easily the largest ever organized by the US Navy League in Southern Thailand, it had an indisputably international flavor, with volunteers from a wide range of countries taking part, including a large turnout by students and staff at the British International School, QSI International School and other such private schools on the island.

Perhaps most heartening of all was the high level of participation from the local community in Pa Khlok.

Thanks also go to our media co-sponsor the Siangtai Daily newspaper and its publisher Chaowapong Mekkerakul for helping to publicize the event in Thai to local Thai communities across Southern Thailand.

The event also served as a most welcome showcase for its host venue, the Phuket Airpark, showing just how much its numerous facilities have been developed since the first event it hosted, on a dusty landing strip back in 2010.

Most importantly, the US Navy League will use all net proceeds generated from the event to help fund its important “comrel” (community relations) events that are of such great importance in maintaining a positive relationship between local communities and visiting US servicemen and women, who offer to volunteer during their shore leaves in Phuket.

We hope that the success of this year’s event will help encourage potential sponsors – including the American Embassy and Chamber of Commerce in Thailand and its many member corporations – to help support next year’s event, which we expect to be even bigger and better.

The Phuket Gazette was delighted to sponsor this event, not only for its charitable purpose but also for its potential to foster positive relationships between Phuket’s growing expat and local communities.