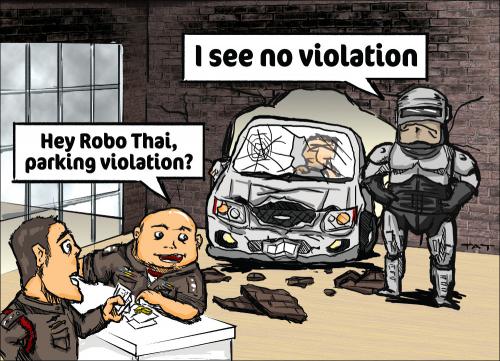 PHUKET: It is hard to imagine that only two countries in the world have more deadly roads than Thailand.

Yes, Phuket Land Transport officials should take a measure of pride in the reduction of road accident deaths in recent years, but the island obviously has far to go before conditions on the roadways can be considered anything close to acceptably safe.

The “culture of carelessness” that pervades Phuket roads, and Thai roads in general, has been addressed numerous times in this space; yet, it remains the most fundamental and intractable factor in road deaths.

The smiling toddler you see perched tenuously on a plastic chair placed in the sidecar of a swerving, makeshift salaeng will be among the next generation of Thai drivers – if he or she survives to adulthood.

The reason so many Thai drivers take such a fatalistic view when it comes to road safety, and safety issues in general, is beyond the scope of this column. As such, it came as welcome news when the road-safety seminar last week (story here) attempted to tackle such mental constructs.

At the risk of being branded cynical, it can be expected that the reported decrease in road fatalities on local roads between 2007 and 2013 stems not entirely from better driving practices or road-safety campaigns, but rather from the fact that the increase in the number of vehicles has created more gridlock.

It is increasingly difficult to find a stretch of road where one can attain the speeds most often associated with fatal collisions.

Our once-gorgeous island landscape is being transformed, day-by-day, into a mini replica of Bangkok.

The only elements missing, sadly, are things like metered taxis that actually cruise the streets in search of fares, a regular and reliable system of buses, a light rail system or some other more advanced forms of public transport that could go a long way in both increasing safety and reducing road congestion.

It goes without saying that traffic police are either unwilling or unable to impose order, and the concept of issuing fines or making arrests for moving violations remains a mostly alien one. Running red lights is routine, double and even “triple parking” is practiced with impunity and motorbike riders talk and even text while riding on the wrong side of the road.

The mind boggles at all the recklessness that can be observed day in and day out.

It seems a driver would almost have to plow his vehicle into a police station, like Arnold Schwarzenegger in Terminator, before a ticket would be issued or an arrest made anywhere other than at a traffic “checkpoint” or the locations of the new speed cameras.

Phuket Opinion: Creating a family for the ill far from home