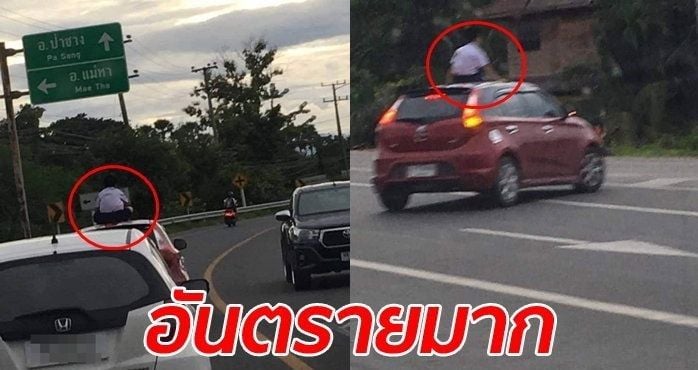 Photos of a young child sitting on the roof of a moving car have caused outrage on social media.

The pictures, posted on Facebook yesterday, show the child in school uniform, sitting on the roof of a car as it travels along a main road in Lamphun province, northern Thailand.

Debate rages over the images, with many pointing out how heartbroken the parents would be if anything were to happen to the child as a result of their recklessness. One person suggests the parents may have placed the child on the roof deliberately, as a way of attracting public attention.

Another claims to be so angry that he would like to teach the parents a lesson, and points out that if an accident were to happen, the other party would feel terrible for injuring or possibly killing a child.

The Facebook user who posted the pictures questioned what the car driver was thinking.

“This is so dangerous, how could you allow this? My brother sent me this picture. What made the parents think that a child sitting on the car roof while it is driving is considered okay? This is so dangerous. This took place at the Tha Jak Intersection, Lamphun Province. If it seems like I’m blaming someone then I apologise, but this is truly very inappropriate.”

According to one Twitter user, the mother of the child has been questioned by police and claims it was the child’s grandfather who was driving at the time.

She adds that her son loves sitting on the roof of the car and does so regularly. Apparently, she didn’t expect it to cause such a stir.

The police have fined her and given her a warning.