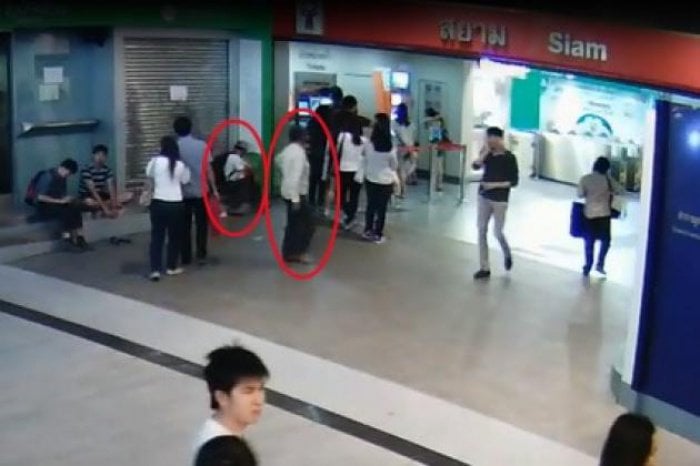 PHUKET: Arrest warrants are expected to be issued today for two men suspected of planting and setting off twin pipe bombs near Siam Paragon shopping mall in Bangkok on Sunday night.

One of the suspects is seen wearing a white cap with a bag slung over his shoulder. Another man is wearing a black cap and holding an orange plastic bag.

“It is likely the men failed to trigger the bomb through this timer, or this digital clock was meant as a distraction for the police to determine which detonation method was actually used,” the source added.

The source said the man wearing the white cap looked as if he was trying to ignite a lighter, with the light from an unknown source seen in the footage. Both men left the scene and entered the BTS Siam (Skytrain) station, leaving behind the orange plastic bag.

After 40 seconds went by, a bright flash was seen rising behind an advertising light box, where the bag was hidden. An incendiary detonation sparked for three seconds, and the first bomb went off. The same steps occurred 32 seconds later in another orange plastic bag left by the man in the white cap, and the second bomb went off.

Another police source said that police were following a lead that the two men travelled by taxi through Soi 7 of Siam Square, opposite Rama I Road, before they approached the scene on foot through Soi 3.

Police are verifying the pink taxi’s licence plate to reach its driver, who will be questioned when found.

Anger at secret moving of Rohingya

Serial rapist of elderly put on CSD ‘most wanted’ list