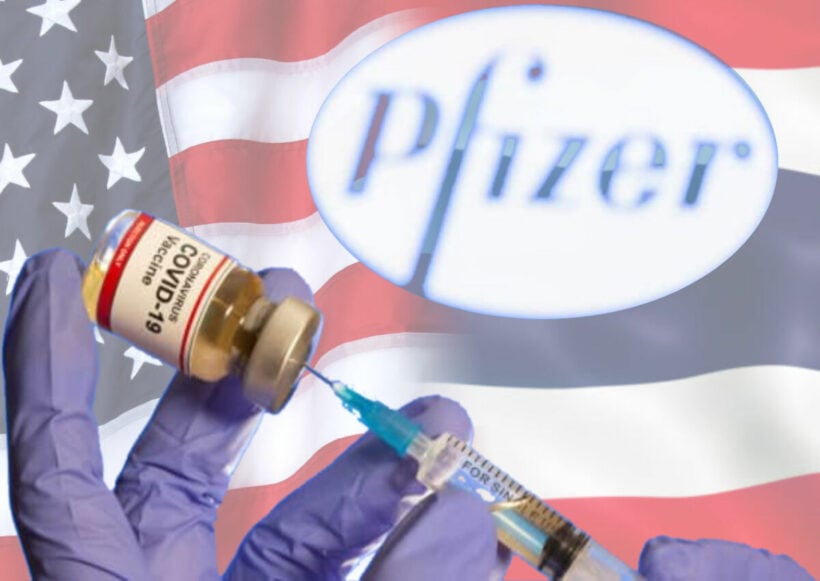 FILE PHOTO: The US and Thailand discuss delivery of the 1 million Pfizer vaccine donation.

The saga continues for the additional 1 million Pfizer vaccines that the US donated to Thailand that has been lost in bureaucratic red tape. The United States has now said they will organize a meeting with Thai authorities to discuss the delivery of the donated vaccines.

Previously, Minister of Public Health Anutin Charnvirakul denied claims that he had dropped the ball on receiving the vaccines and claimed the US never gave notice through proper channels. Then US Senator Tammy Duckworth was quoted as saying she told Thai authorities a month ago they need to complete the paperwork to receive the vaccines.

Now the Thai ambassador to the United States confirmed that US authorities contacted the Thai embassy in the US to arrange a meeting between the 2 countries next week to discuss the donation process. The same group had helped arrange the original 1.5 million Pfizer vaccines the United States donated nearly two months ago.

A spokesperson for the US embassy in Thailand meanwhile highlighted the complexity of the transfer. She said a number of mandatory legal and regulatory agreements must be hashed out between the giving and receiving country as well as the pharmaceutical companies involved before the vaccine delivery can proceed.

Furthermore, the pharmaceutical and medical companies involved need legal agreements and proper status with the Thai government to gain regulatory approval to handle the vaccine donation.

The embassy spokesperson said that the same process was hammered out before the previous 1.5 million doses were donated, begging the question of why there was so much bureaucratic fumbling to repeat the same process a second time.

“Next week, we hope to have a bilateral call to work through the legal, logistical, and regulatory items needed to move the doses. We look forward to welcoming the second shipment of vaccines to Thailand as soon as possible.”

Bob20
5 minutes ago, Alavan said: Pfizer vaccin was transported from the production unit in Belgium to the US packed with dry ice and airlifted. So why can't this happen again? Has Thailand realy no adequate freezers to keep it at…
Alavan
17 hours ago, Bob20 said: Friend, I understand what you are saying, but it's not that simple and beyond what you've read in the paper you don't seem to know about the complexity of these things. This is not a…
Bob20
1 minute ago, Alavan said: Being in the shipping industry my whole working life, worked the seaside and the shoreside of it, signing thousands of Bills of Loading in Europe, US and Africa, handling customs (and immigration) documents, doing cargo…
DrBongo
On 9/27/2021 at 2:19 PM, Marc26 said: We spent 2 months in Boston May-July My wife got her Pfizer vaccines in Boston Coming up on 4th of July, she said "this year I am going to celebrate 4th of July…
Marc26
4 hours ago, DrBongo said: Boston. I'm in Amherst. Sister-in-law is in Arlington. My whole family, both sides, are from Charlestown, I grew up in Everett Basically lived in both places growing up   We used to play Arlington in…