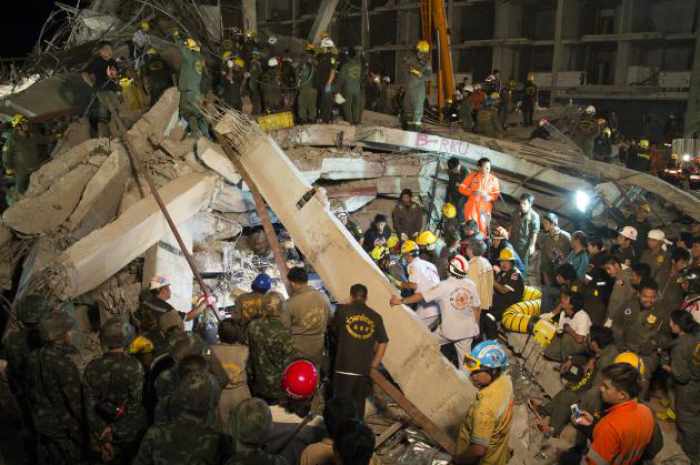 PHUKET: A Buri Ram woman who made a desperate dash from the northeast to Pathum Thani in search of her husband – trapped in a building that collapsed late on Monday – was able to say just a few words to him, before he died early yesterday.

After learning on Monday from a television report that a six-storey condominium being built in Klong Luang had collapsed, Sutha Arunsri travelled all the way from her home in Northeast Thailand to the site in hope of learning the fate of her husband Chettha Kamphuchat, who was trapped in the debris.

It was a journey of 400 kilometres tinged with hope, but one that ended, ultimately, in tragedy.

Standing anxiously outside the sealed area since 5am yesterday, she said her husband was a farmer who had only started working at the construction site two days ago.

“I’m worried about my husband and I can’t get hold of his four or five worker friends to learn about him. I’m not sure if they were all trapped in the debris,” she said.

Chettha was one of seven workers stuck in the wreckage yesterday morning. He was able to talk to rescue workers throughout the night and was given a large amount of saline and oxygen. By 6am, he could still talk, but his pulse weakened until he lost conscious.

Rescue workers took Sutha to talk to him briefly. But that was all they could do. At 9.30am he passed away while his wife waited in vain outside.

All but one of seven workers who were trapped ended up dying, bringing the death toll to at least eight, while about 30 others were injured, five seriously.

The search and rescue mission by soldiers, officials and workers equipped with machinery ended late yesterday. They face difficulty because removing the rubble required caution amid fears the structure might collapse further.

Late yesterday – 24 hours after the building collapsed – the drama ended. Of the last six who were trapped all but one died and the army begun lifting the heavy material away from the site.

The one trapped worker who survived was Chon Buri native Klanarong Prappai, 24, who communicated with rescue workers that his legs were stuck under the debris. His mother Pratheep Arunsri, who arrived at the site from Pattaya yesterday afternoon, said Klanarong had come with relatives to work at the site.

As the search for her son continued, Pratheep told reporters Klanarong had planned to bring his wife and son to celebrate National Mother’s Day with her.

Engineering Institute of Thailand (EIT) president Suchatvee Suwansawat said the rescue mission made safety a priority. The searchers had to drill through to the victims rather than digging and lifting rubble out.

There would also have to be a plan for removing debris from the site after all the victims were out, he said.

Suchatvee said that after the rescue mission was over, an EIT team would inspect the building, which was reportedly 50 per cent constructed, to see if the work had been carried out properly and according to the plan. It would take some time for engineers and forensic police to determine what caused the collapse.

An informed source reported that the area was a wetland that had suffered from the 2011 flood, before being purchased for building construction.

Survivor Ronnachai Thirat, 25, recalled that he was resting inside the structure when he heard a loud sound like a lightning strike above, followed by clouds of dust. He immediately sprang out for safety just before the building collapsed.

“I don’t know how I escaped. I’m very lucky to survive,” he said.

Ronnachai sustained a head wound and injuries to both legs.

Pathum Thani Governor Pongsathorn Sajjachonlaphun said police would summon the condominium-project owner and project engineer for questioning. Local authorities, as a precaution, would inspect a nearby condo building in the same project.

Dr Narong Sahamethapat, permanent secretary of the Public Health Ministry, said the incident affected 33 workers – 24 Thais and nine migrants. Most of the injured had been treated and released, but five remained in hospital. Their medical costs would be covered.