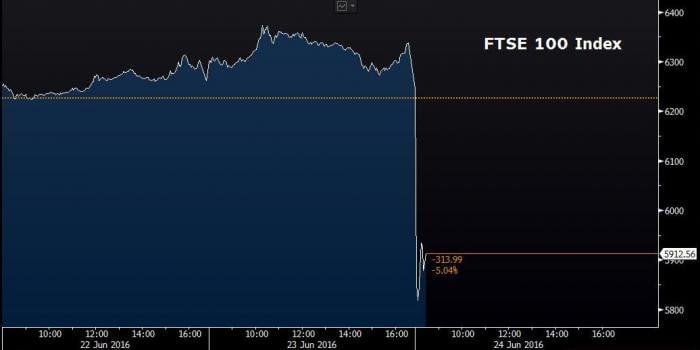 MARKETS across Asia are reeling after it became known this afternoon that Great Britain will exit the European Union.

Investors are fleeing to more stable currencies, such as the US dollar, the Swiss Franc and the Japanese Yen, causing major upheavals in Japan whose government has been trying to devalue the Yen in an effort to increase exports and stimulate economic activity.

The Stock Exchange of Thailand sloughed off 40 points after a day of heavy trading, as investors scramble to cope with the Brexit financial fallout. The SET fell below the 1,400 benchmark that economists predicted in a Brexit scenario.

With the London Stock Exchange just opening, the Pound sterling has already fallen to its lowest value since 1985.

On the other end of the see-saw, the price of gold jumped 60 dollars today as investors poured money into traditionally safe investments. Treasuries were also the subject of the frenzied exodus toward stability, as the yield of a US 10-year note fell more than 20 points to 1.45 per cent.

The shakeup in world markets could impact Thailand if the fallout stretches over an extended period. With European currencies at historic lows, tourism – a key driver of the Thai economy – may suffer in the short term. In the first four months of 2016, tourists from the EU and the UK generated 290 billion baht for Thailand’s economy, about 20 per cent of the total tourist income. At the same time, a stronger US dollar may encourage more American tourism to ‘The Land of Smiles.’

The Kingdom’s exports, which account for 65 per cent of GDP, are also in upheaval. Commodities markets remain a mixed bag, with the prices of rubber and rice dropping, while sugar continues to spasm and fluctuate.

Thailand’s computer manufacturing sector, which makes up 15 per cent – the largest share – of the country’s export market may also be in trouble if the trend in commodities persists. Copper, often considered a bellwether for the consumer electronics sector, suffered a three per cent drop today.