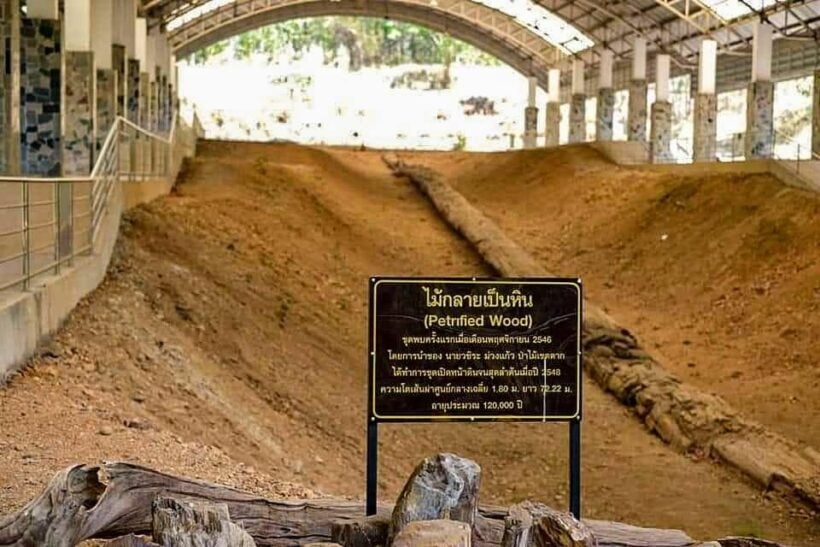 Photo via Ministry of Natural Resource and Environment

Thailand is trying to break a Guinness World Record. Officials believe the longest petrified log in the world is in Thailand’s Tak province near the Myanmar border. Apparently, the 120,000 year old log at Doi Soi Malai National Park stretches 72.2 metres, the same height as a 20 storey building.

China’s Qitai, Xinjiang currently holds the title of the world’s longest petrified log at 38 metres. With Thailand’s log significantly longer, the Ministry of Natural Resource and Environment announced yesterday that they are preparing to apply for the Guinness World Record and claim the title.

The wood was of the Thong Bueng tree species, usually found in southern Thailand and the Malay Peninsula. The minister says that during ancient times, the tree may have towered to more than 100 metres in a wet tropical forest.

Thailand’s holds the title for worst monsoon in the world for its monsoons that raged throughout the country from September to December 1983. Around 10,000 people died and around 100,000 people contracted water-borne diseases. The damages are estimated to be valued at more than US$400 million.

Thailand exported 8,094,000 tonnes back in 2007, a global share of 27%, according to information from the Food and Agriculture Organization of the United Nations, making Thailand the largest exporter of rice in the world.

The women in the Padaung, or Kayan, tribe in northwestern Thailand and Myanmar border towns have the longest necks in the world. Many of the women in the tribe bind their necks with heavy brass rings. A study in 2018 by researchers from Otsuma Womenʼs University found that these rings had increased the distance from the suprasternal notch to the lower jaw to as much as 19.7 centimetres.

Back in 1989, the Bangkok Criminal Court sentenced a woman to 141,078 years in prison for fraud. Champoy Thipayaso, an employee of the Petroleum Authority of Thailand, was sentenced to life imprisonment for her involvement in a multi-million dollar pyramid scheme.

In 2019, the Tourism Authority of Thailand in Bangkok made a 4,500 kilogram serving of mango sticky rice at an event to promote tourism exchange between China and Thailand. More than 200 people were involved in the 10-hour cooking process using 1,500 kilograms of sticky rice, 2,300 kilograms of coconut milk and more than 5,000 mangos as well as lots of sugar and salt.

PapayaBokBok
19 hours ago, HolyCowCm said: Apparently on my mobile phone on this site too. Getting whammed with adverts now. I use my laptop and adblock...zero ads....   sabai sabai

longwood50
Maybe TAT can use this to boost tourist travel to Thailand and downplay the lockdowns, quarantines, mask mandates, no restaurants, no alcohol, no beaches policies.