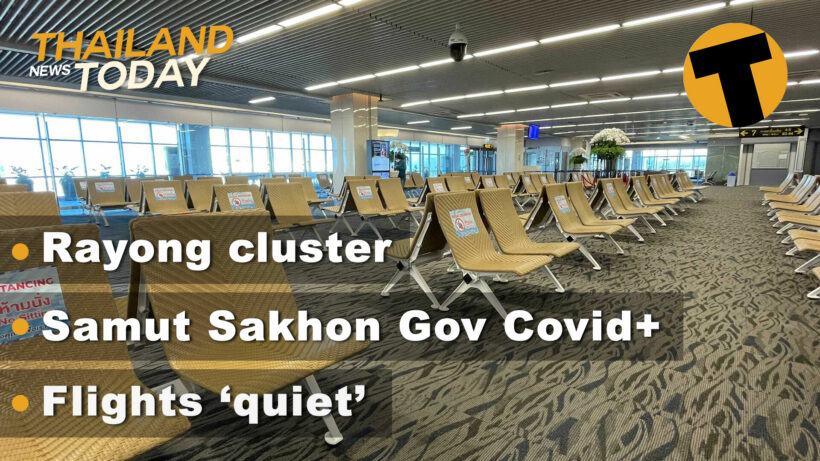 The CCSA has reported 144 new Covid-19 infections today – 115 local infections, 14 migrant workers and 15 quarantined arrivals. The total number of cases in Thailand, since February is 6,285. 2,045 people are currently receiving medical treatment in Thailand for the coronavirus.

The local infections are all linked to the cluster in Samut Sakhon 10 days ago. The current outbreak has now affected some 38 provinces across the country.

• Local infection cases linked to gambling in Rayong province, consisted of 21 new cases in Rayong, 1 in Chon Buri and another in Chiang Mai today. The new hub of Covid-19 infections has surfaced in Rayong, 40 kilometres south of Pattaya, linked to a local illegal casino in the main city district. 106 cases have been identified there since Saturday.

The Rayong police chief has been transferred to an inactive post at the Royal Thai Police Office over the surge in Covid-19 infections in the province.

• Meanwhile, the Samut Sakhon governor has tested positive for Covid-19 and is now quarantined in a hospital for treatment. He had an hour-long meeting yesterday with public health officials, including the Public Health Minister Anutin who is now quarantining at his home.

• In other news the Samut Sakhon provincial stadium in the main city district is being converted into a field hospital with a capacity of over 500 beds. The facility has been fast-tracked to provide Covid-19-related services for some of the 4,000 Burmese migrant workers currently in quarantine in the seafood market area.

It is one of 3 temporary field hospitals being established to cope with the outbreak.

In the first days after the cluster was detected, 44% of the people tested were positive for Covid-19 infection. That percentage has now dropped to 12% as people continue to be tested.

• Around the country there has been a tug at both ends of Thailand’s groaning domestic travel industry. More Thais and local expats have been travelling but there has been a marked drop off in the past few days as travellers are now wary about travelling during the current 2nd surge of cases in Thailand.

Today, fewer flights took off from Phuket airport and airlines have rescheduled a number of flights and reported higher than usual no-shows on existing flights. There are currently no specific travel restrictions between airports in Thailand.

• Thailand’s Department of Health Service Support is demanding a private hospital in Bangkok’s Bang Khen district to remove advertising for people to pre-order their Covid-19 vaccines. The vaccines they were advertising were from the US biotech firm Moderna.

While the Moderna vaccine is now approved by food and drug authorities in Canada and the US, the vaccine still needs approval from Thailand’s FDA. At this stage no Covid-19 vaccines have been certified for use in Thailand.

The advertisement were placed on social media on December 26 stating that the hospital was offering a Covid-19 vaccination. Of course, they were flooded with enquires. The hospital has not declared how many people responded to the promotion or paid booking slots for the proposed vaccine.

• As the government confronts its latest battle with a new outbreak of Covid-19, the TAT announced today that a total of 3,065 foreign tourists arrived in November, only the second month that long-stay visitors have been allowed in since the borders were largely closed to foreign visitors in April.

The 3,065 foreign tourists las month is a lot fewer than the usual 3.5 million arrivals for November last year.

In October, 1,201 foreign visitors were allowed in.

The government has already said it won’t be easing any more restrictions during the current outbreak.