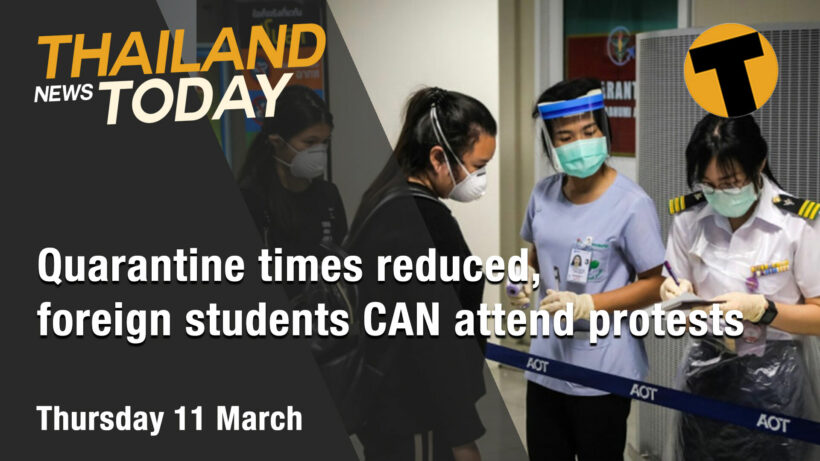 Hints of a possible return of the former Immigration Bureau poster boy Surachet Hakparn, a rise in the official speed limit for Thai highways, foreigners told they CAN take part in protests and some rumours about an impending opening of Maya Bay. But first to a survey we posted this morning about what we might be able to do in drawing attention to the plight of the people in northern Thailand.

In asking the question most of you thought we should keep up writing stories about the issue in the hopes of shaming the government into some action. The second most popular answer was The Thaiger spending a week in Chiang Mai to cover the story. So we’ve decided to do both.

I’ll be heading to Chiang Mai on the week after next to deliver a first hand account of the problems and see if we find out whose door we need to knock on to get some action.

The Thai government has approved a reduction in the mandatory quarantine time for certain categories of visors arriving from overseas. The national committee on communicable diseases has approved the changes based on the fact that a global vaccination drive is leading to a gradual reduction in case numbers around the world.

Thailand’s Immigration Bureau has clarified the sticky question of foreign students attending fellow student protest events. The Bureau has confirmed that they can take part in political gatherings provided they follow the law. The news comes after The Asian Institute of Technology sent an email to its students saying it respected freedom of expression but was conveying a request from Thai immigration for foreign students not to join protests.

Thai media is is getting all frothy amid rumours of the imminent return of their former favourite…. Surachat Hakparn, the Royal Thai Policeman and Immigration Chief who fell from grace 2 years ago.

Bangkok’s Wat Arun is going green on St Patricks Day. Plenty of iconic landmarks around the world will celebrate St Patrick’s Day by going green on March 17 and Thailand’s most famous temple will not be left out. Also turning green, with green hues being projected onto the building, will be the Thailand Cultural Centre, the Conrad Hotel, the Irish Embassy on Wireless Road, and the All Seasons Place shopping Centre.

The end is in sight: CCSA hints at October for lifting restrictions, re-opening Thailand