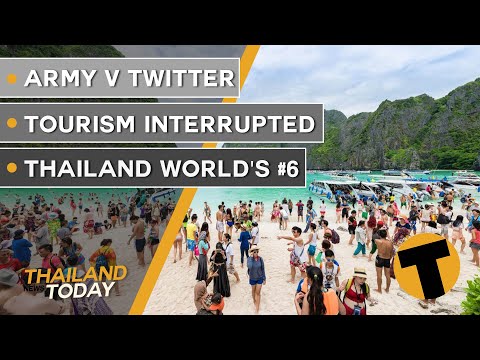 An army clerk is calling out the Thai Army for alleged corruption, saying he was forced to withdraw money under his name which was then falsely documented as a travel expense.

The clerk at the army’s Ordnance Material Rebuild Centre posted photos of documents on Facebook, showing the withdrawal listed as a work-related travel expense. He said the documents are “evidence of corrupt practices” and he used the hashtags #ReformtheArmy and #Thatsnotourtax. All power to the young man.

Meanwhile it hasn’t been a good day for the Thai Army with Twitter suspending 926 accounts that are linked to the Royal Thai Army for violating the social media company’s “platform manipulation” policies. They say the accounts were “amplifying pro-government propaganda” and engaging in behaviour that targeted political opposition figures.

The research division of Kasikorn Bank says while the government’s latest shopping stimulus package has its advantages, the benefits will only be short-term. The Kasikorn Research Centre points out that the scheme, which will run from October 23 to December 31, will only provide a temporary boost to the economy.

If the stimulus goes ahead, shoppers will be given 3,000 baht cash each, with a maximum daily spend of 150 baht. The payment is intended to subsidise consumer purchases, with the exception of lottery tickets, flight and accommodation bookings, alcohol and tobacco.

A senior tourism official has told Reuters reporters that “administrative issues” are the reason for the delayed trip of foreigners on the Special Tourist Visa. But other officials claimed the postponement was done to help ease Covid-19 fears for Thai tourists planning on travelling to Phuket for the annual Vegetarian Festival later this month.

A group of 120 to 150 foreigners on the new long stay visa were supposed to fly from Guangzhou, China to Phuket yesterday after a 6 month ban on international tourists. Covid-19 mobile testing units were even sent to the Phuket International airport this week and are there to test foreign tourists when they enter the country.

But the Tourism Authority of Thailand governor says that the delay is due to issues in the process for applying and issuing the Special Tourist Visas.

There has been confusion with a number of reports over the past week about when the flight will arrive, some saying the flight would arrive on October 8 and others saying it has been postponed.

Both the Phuket governor and the National Security Council secretary general say the flight has been rescheduled and will arrive after the Phuket Vegetarian Festival. They claim that many domestic tourists who plan on attending the festival, fear the foreign tourists could spread the virus. None of this bodes well for the country trying to reboot its battered tourism industry.

Members of the Free People pro-democracy group announced the details of their next major protest planned for next Wednesday, October 14. Human rights lawyer Arnon Nampa, one of the key leaders in the current anti-government protest movement, has confirmed that the rally will kick off at 2pm next Wednesday.

The event, an exotic mixture of Chinese mythology, not very good vegetarian food and plenty of fireworks, runs for 10 days each October and requires adherents to stop eating meat, drinking alcohol or having sex for 10 days.  The Thaiger will be there to cover this year’s events so expect the unexpected.

And Thailand has ranked #7 in a ranking of the Top 20 Countries in the World, by readers of Condé Nast Traveller in the 33rd Readers’ Choice Awards 2020. Italy, Sri Lanka and Portugal scored the top 3 positions in the prestigious listing.

Chiang Mai was placed 2nd on the Top 10 Best Small Cities, and Ko Phangan was rated 3rd on the Top 5 Best Islands in Asia.

For Thailand, the confidence of Condé Nast readers can do little to help its tourism industry with the borders all but closed except for a handful of high-spend travellers.