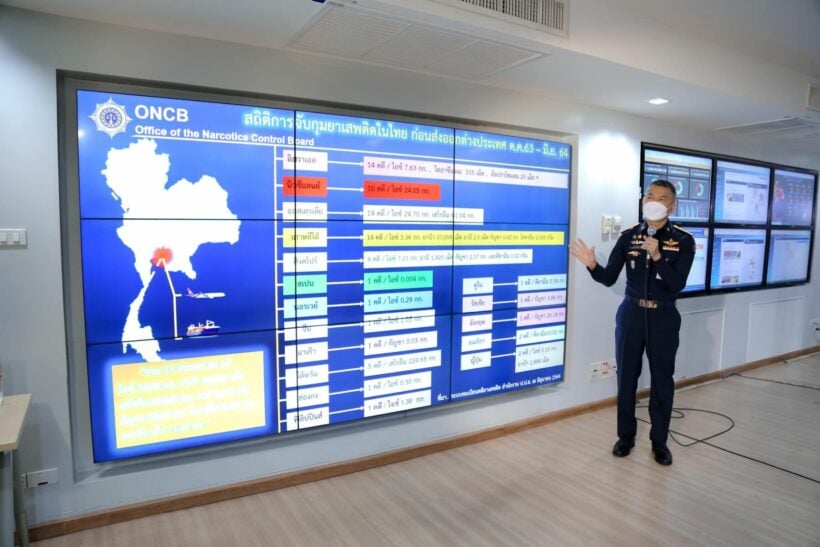 “Good news” will be reported soon on Thailand’s crackdown on transnational drug trade, at least that’s what police are saying today about the ramping up of the transnational drug rings and trafficking. Drug suppression operations have intensified over the past month with numerous drug seizures including several at Bangkok’s Suvarnabhumi Airport where methamphetamine and heroin were found hidden in packages en route to Australia and New Zealand.

Deputy police commissioner Manoo Mekmok says that after recent arrests and drug seizures, police now have strong evidence, hinting that there will be “good news” reported by police in the future, particularly the trafficking of drugs through Thailand to other countries like Australia and New Zealand.

Recently, in separate cases, 11 suspects were arrested and police seized a total of 516 kilograms of methamphetamine and 4.2 million amphetamine pills. The deputy police commissioner says officers now have “strong evidence.”

“Thailand is a major transit country in the transnational illegal drug trade, with the majority of methamphetamine and heroin produced in Myanmar’s portion of the Golden Triangle.”

The announcement follows last month’s major drug seizure at a port in Sydney where the Australian Border Force searched a Thai cargo ship and found a total of 300 kilograms of methamphetamine hidden inside electronic water heaters and barbecue grills.

Another major bust involving drugs trafficked from Thailand, a Thai man was arrested in South Korea on drug charges after authorities at Seoul’s Incheon Airport found more than 4 kilograms of methamphetamine hidden in protein supplements

Over the past week, a task force at Bangkok’s Suvarnabhumi Airport has reported a series of drug seizures where drugs were hidden in packages en route to Australia and New Zealand. In some packages, methamphetamine was stuffed in hollow metal motorcycle parts. In a couple of other parcels, the task force found heroin concealed in notebooks.