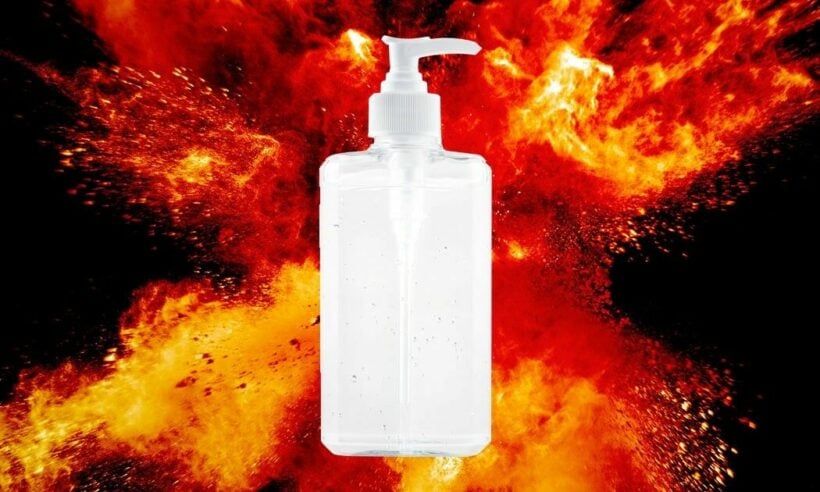 Thai people are being warned not to use hand sanitiser spray elsewhere on their bodies or near a naked flame. The Food and Drug Administration issued the warning after a woman sprayed disinfectant spray all over her body (no, we don’t know why either), then lit a mosquito coil. She sustained serious burns for which she’s still receiving hospital treatment.

The main active ingredient of hand sanitisers is… ALCOHOL. Which is flammable.

According to a Thai PBS World report, Weerachai Nolwachai from the FDA has pointed out that disinfectant spray, such as hand sanitiser, is highly flammable and it’s not really a good idea to spray it all over yourself and then light a match.

Instead, Weerachai suggests using the spray as intended: to disinfect hands. He says users should rub the spray in thoroughly to ensure the alcohol has evaporated before they start cooking or smoke a cigarette or light a mosquito coil – or presumably start fire twirling.

Transam
That brings back memories, a naked flame.....😘

Noble_Design
4 minutes ago, Transam said: That brings back memories, a naked flame.....😘

ozvenision
Shit, I usually scratch my nuts straight after... better be careful when doing the blue flame 🙃

Thommo
1 minute ago, ozvenision said: Shit, I usually scratch my nuts straight after... better be careful when doing the blue flame 🙃 Please dont post a picture 🥴