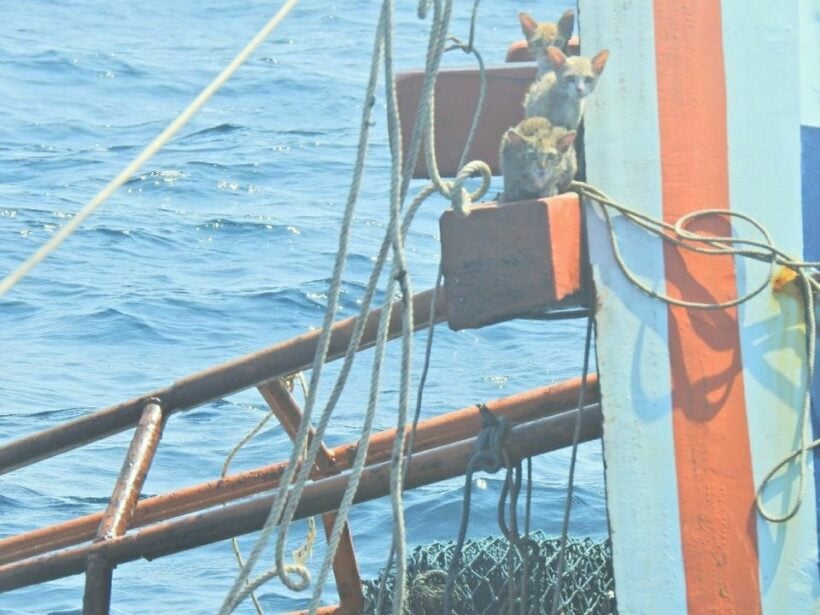 The Thai navy is celebrating receiving a PETA award after rescuing a group of cats from a sinking ship that had caught fire in the Andaman sea.  The Hero to Animals Award was given to the naval officials by the People for Ethical Treatment of Animals group after Facebook user “Nookool.b” posted photos of the feline rescue mission.

The ship’s 8 member crew had jumped off the sinking Phamonsin Nava 10 and were rescued by a passing fishing ship, but noticed 4 cats were left onboard. Navy sailors rescued the cats by carrying them piggy‐back style across the water to the navy vessel unit. The felines were safely rescued and were in good condition, just a bit dehydrated.

“They carried each cat on their backs and swam back to the Navy vessel until every cat was rescued.”

“Peta hopes their example will inspire everyone to keep an eye out for animals in danger and do whatever it takes to ensure their safety.”

PETA says they are sending the navy a framed certificate and letter of appreciation. The animal rights group has also offered to pay for the spaying or neutering of the cats.

In 1 rescue photo, a cat was shown to be riding piggy-back on a sailor as his crew mates pulled them both to safety. Other photos show the cats after they were rescued, enjoying food and cuddling in the naval command post in Koh Lipe.

Their rescuers, members from the Air and Coastal Defence Command Operation Unit 491, found the cats the day after they were deployed to assist the crew of the ship that had caught fire. The ship was located about 13 kilometres off Adang Island in the southern province of Satun