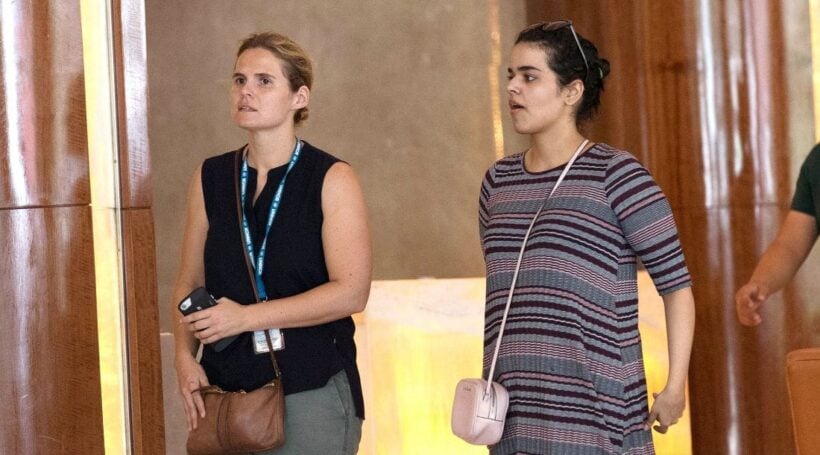 She came to public attention last weekend when she barricaded herself in a Bangkok airport hotel room saying she had been abused by her Saudi family.

In a widely followed social media (Twitter) campaign, the plucky 18 year old explained she had “escaped Kuwait” and her life would have been in danger if Thai authorities had deported her back to Saudi Arabia.

Thai authorities, who initially threatened to deport her back to Saudi Arabia, say she was seen off by Canada’s ambassador to Thailand.

“Canada has been unequivocal that we’ll stand up for human rights and women’s rights around the world. Australia too said it might offer sanctuary.”

Canada already has frosty relations with Riyadh over Canadian demands for the “immediate release” of jailed rights campaigners, including Samar Badawi, the sister of the Saudi jailed blogger Raif Badawi. His family lives in Quebec.

Thai immigration chief Surachate Hakpan says that Alqunun had refused to meet her father and brother who had flown to Bangkok, adding that they were “disappointed” and returning home.

“She chose Canada. Canada said it will accept her. She is safe now and has good physical and mental health. She is happy.”

Thai officials allowed her temporary protection of UN officials on Wednesday after initially threatening to deport her.

The case is the latest highlighting widespread subservient treatment of women in Saudi Arabia.

Al-Araibi was granted refugee status in Australia in 2017 but arrested on an Interpol notice in November while vacationing in Thailand.