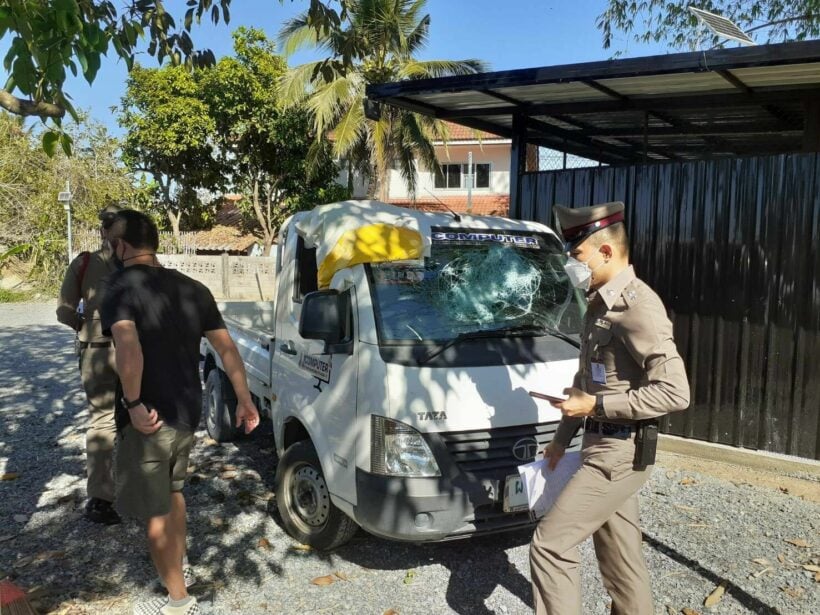 An off-duty police officer was caught on CCTV cameras assaulting a man in the northern province of Lamphun and then going back after the fight to damage a car. Reports in Thai media say the officer refused to leave the restaurant after a night of drinking and also sexually assaulted a female staff.

The officer works under the Crowds Control Division in Bangkok, according to the commander of Lamphun Provincial Police Station. The officer is from Lamphun and he was in the province on holiday. The commander told Thai media that the case has been reported to the suspect’s division and senior manager. Thai media made a note that the suspect is from the same division as the officer who ran his Ducati motorcycle into an eye doctor walking on a crosswalk in Bangkok, killing her.

The officer reportedly went back to the restaurant at around 5am and smashed a long object on a car. Reports say he also used a stone to damage windows, toilets, the kitchen, and other things on the property.

Jason
Rogue police don't really instil confidence, do they...
Graham
Fire him, charge him, fine him, jail him, job done, move on to the next one as I am sure there are plenty more.

Fluke
Imagine waking up with a hangover and it slowly all comes back about what happened the night before and its on the news on TV and you see your Boss in BKK talking about the case .