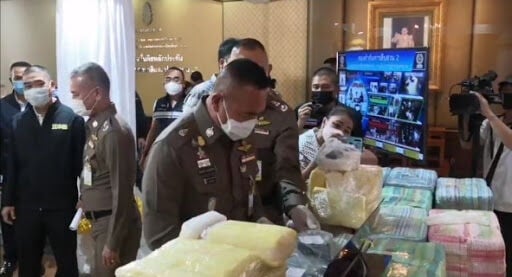 Police arrested 3 people on drug charges and seized more than 2 million methamphetamine pills in busts in Saraburi and Phetchabun. The suspects were allegedly involved in a major illegal drug operation related to major cases in Bangkok and allegedly smuggled drugs from Laos to the border province Loei. Police say another suspect is on the run.

The suspects allegedly admitted to transporting the drugs, earning 50,000 baht to 70,000 baht each time. Police say they seized 2.1 million methamphetamine pills, a 9mm pistol and a pickup truck, which police say was used to transport the drugs.

Police also said they seized a BMW and another pickup truck, which were used for scouting along the route. Police confiscated 3 mobile phones and 2 bank accounts.

41 year old Thanin Phuengkaew, his nephew 25 year old Thawatchai Phuengkaew and 51 year old Thongthap Chanthayod were charged with possession of illicit drugs with intent to sell. Thanin also faces charges of carrying a firearm without a license and carrying it illegally in public.