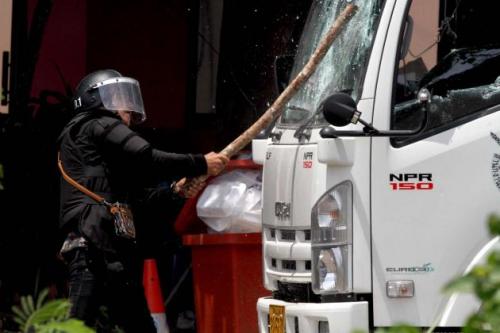 
Police crack down on rubber protest
The Nation / Phuket Gazette
PHUKET: More than 10 vehicles were smashed and set ablaze and people injured when clashes broke out between hundreds of rubber growers and security officials at the Kuan Nong Hong Intersection in Nakhon Si Thammarat’s Cha-uat district yesterday.

The officials used tear gas to disperse the crowd, while the protesters used what they could find – stones or sticks – to hit back.

Deputy PM Kittiratt Na-Ranong said the government had put measures in place to help rubber growers and was not planning to offer anything else. Calling on the protesters to not do anything that affects other people’s rights, he said the government would explain the measures.

Initially, most rubber growers found the Cabinet-approved Bt2,520 subsidy per rai per household deal acceptable, but some demanded the price for rubber be set at Bt120 per kilogram and the subsidy be paid to individual farmers with/without title deeds. Hence, they organized a road block at Kuan Nong Hong again.

Early yesterday, police managed to take charge of the site and re-open Highway 41, but protesters began gathering again at around noon and youngsters started throwing rocks and firing slingshots at officials. That was when police opted for tear gas.

Jaroon Yoschu, a mentally ill man, wandered into the site and sustained a head injury.

As the clash continued and security officials were pushed back, protesters damaged and set fire to a detention truck and several other vehicles. It was reported that a Thai PBS van was also smashed and a reporter’s camera seized by the protesters.

A hair salon near the site was also damaged and riddled with bullets, while protester Somnam Rachrong was shot in the leg.

Chayanin Khongsong, one of 11 protest leaders wanted by the authorities, was also reportedly arrested during the crackdown.

Provincial governor Viroj Jivarangsan said that in the morning security officials went to investigate damage done to a police booth at Kuan Nong Hong Intersection and police then moved to re-open the road.

Meanwhile, 10 Democrat MPs for Nakhon Si Thammarat issued a statement objecting to the crackdown and expressed concern that the situation may get out of control. They urged the government to tell the police to avoid confrontation and employ peaceful means to control the situation.


Trains empty as travellers cancel bookings
The Nation / Phuket Gazette
PHUKET: Many train passengers cancelled their reservations yesterday as the State Railway of Thailand announced that it was suspending all north-bound trains until October 31 beyond Sila At train junction in Uttaradit to make way for repairs.

The SRT is organizing vans to transport travellers if their destination is beyond Sila At, SRT governor Prapat Chongsanguan said.

In recent months, there have been as many as 10 derailments involving North-bound trains, plus a few other mishaps, including last week’s accident at a Bangkok terminal and yesterday’s derailment at Hua Lamphong.

Prapat said the suspension of North-bound trains should be lifted by the end of October, once the tunnels in Uttaradit, Phrae, Lampang and Lamphun as well as railway tracks at curves where derailments have taken place are repaired.

Prapat said that yesterday there were only five passengers travelling to Chiang Mai, while nobody had bought a ticket to the northern city for today.

Usually some 15,000 passengers travel to Chiang Mai in seven train services, Jarasphan said, adding that at least a third of this number would be lost following the suspension.

Two express train services from Bangkok to Chiang Mai had been cancelled earlier, while another three trains will be terminating in Uttaradit to make way for repairs.

The SRT said only three services were now operating on the northern line, and two express train services have been temporarily cancelled. Train travellers are being bussed in both directions between Chiang Mai and Sila At.

The SRT has set up the 1690 hotline for passengers to find out more.

Opposition leader Abhisit Vejjajiva said there were 89 derailments in 2012 and the total reached 113 by September 10 this year.


BMA seeks to ‘kill’ fire engines deal after ruling
The Nation / Phuket Gazette
PHUKET: The Bangkok governor is cranking up efforts to kill a contract signed with an Austrian firm to supply fire vehicles following a landmark corruption ruling last week on the highly controversial deal.

In the hope of adding more weight to their plea, the Bangkok Metropolitan Administration (BMA) has said that it will ask a Switzerland-based arbitrator to regard the Supreme Court’s ruling, under which a former deputy interior ministry was sentenced to 12 years in jail, as evidence.

The BMA also wants the Attorney General to file a lawsuit with the Intellectual Property and International Trade Court in order to get Austria’s Steyr Daimler Puch Spezialfahrzeug to cancel the contract under which it sold fire vehicles for Bt6.6 billion.

The city administration has asked the Court of Conciliation and Arbitration in Geneva to help get the contract cancelled and to seek a refund for unused fire vehicles, which it says stemmed from the corrupt deal.

The BMA also wants related officials to pay damages at the Central Administrative Court, while the relevant agency will take disciplinary action against these officials.

Bangkok Governor Sukhumb-hand Paribatra said the Supreme Court ruling was clear proof the fire vehicles were bought under a questionable deal, and that it supports the BMA’s push for the arbitrator to cancel the contract and get a full refund.

He said the BMA would be sending the arbitrator a translation of the ruling to further its case.

The pair allegedly pushed for the purchase of 315 fire trucks and 30 fire-fighting boats without comparing prices, which allowed the Austrian company to sell the vehicles at a price that was nearly 49 per cent higher than it would have been if bought locally.

Pracha was absent when the verdict was read. He is thought to have fled abroad.