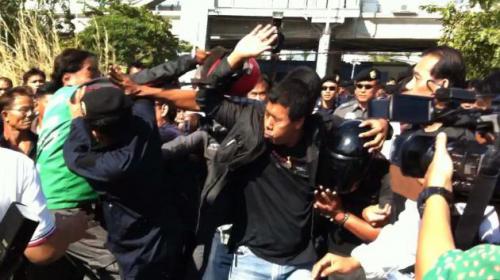 
Police begin search for other young Nui victims
The Nation / Phuket Gazette
PHUKET: Police are in the process of identifying all the young victims of a confessed serial rapist and killer.

The 36-year-old man, known only as Nui, has confessed that he raped and murdered two girls between December 6 and 9. One was killed in Bangkok, and the other in Prachin Buri.

The two were in addition to three young victims he sexually abused in Loei some time ago, according to his confession. He also killed one of those three.

But police fear the list of his victims may be much longer.

“We are trying to find out if he has committed more crimes in other areas, especially in areas his employer – a mor lam band – has staged performances,” Metropolitan Police Commissioner Lt-General Camronwit Toopgrajank said.

Since Nui joined the band on November 18 last year, it had travelled to 28 areas for a show.

On December 6, the popular mor lam (traditional Isaan music) band performed in Bang Na in Bangkok, where Nui said he spotted a girl alone in a car park. According to his confession, he lured her to a secluded spot, strangled and raped her.

That victim was quickly reported as missing by her parents.

The girl had gone to the concert with her father. Noticing that his daughter fell asleep during the show, he let her sleep in his friend’s pickup truck while he went back to see the concert. Then things went terribly wrong.

“I now repent. I committed the crime because I was drunk. Please forgive me,” he said and then prostrated himself before the couple.

Police often stage sessions like this where a perpetrator seeks forgiveness for such crimes. But in this case the parents refused to forgive him.

“What is your heart made of? Why didn’t you have some sympathy for the girl?” one parent hit back.

When Nui re-enacted his crime in Bang Na yesterday, a number of people turned out to curse him. Some also hit him. But police stood firm and managed to prevent him from being lynched.

The Mirror Foundation, which tries to help missing children, said it was necessary to set up a police unit to quickly handle requests for recordings from security cameras at some spots. “If we act fast, we will be able to rescue children faster,” the foundation’s secretary general Ekalak Lhumchomkhae said yesterday.


PDRC seeks to postpone election
The Nation / Phuket Gazette
PHUKET: The Election Commission’s new team says it could delay the general election from the scheduled date of February 2 while political parties prepare for the judgement day. Meanwhile, the opposition Democrat Party remains undecided on whether to field candidates.

“We are willing to delay [the election] for three months, six months, one year to two years. But first things first: The political parties have to reach an agreement. The second thing is whether it [a delay] is allowed by the law. We, the EC, are the third factor,” EC member Somchai Srisuthiyakorn said.

He made the remarks after representatives of the People’s Democratic Reform Committee (PDRC) protest group met with the EC yesterday and submitted an open letter calling for a postponement of the election. The representatives were Sathit Segal, Somsak Kosaisuk, Somkiat Pongpaibul and General Preecha Iamsuphan.

Somsak also read an open letter from PDRC secretary-general Suthep Thaugsuban said that the demonstrators want to reform the country before an election is held.

In an earlier statment, Suthep said the national reform may take a year and a half to complete.

Somchai said he admired the good intentions of the PDRC to see national reform but there were some legal limitations for the EC.

The government can issue an executive decree to postpone an election if there is an emergency situation, he said. For example, if there were a national disaster or a war, nobody would go to the polls. But such a postponement needs approval from the EC, Somchai said.

If the election date cannot be postponed, he urged the PDRC to help campaign for a fair election without vote-buying.

However, the EC accepted the letter from the PDRC and said it would consider the demands therein. The commissioners asked the group to recognise that it was their duty by law to organise the election.

No blocking of process

The EC has set December 23-27 for party-list candidates to submit their applications to run in the election. Caretaker Interior Minister Charupong Ruangsuwan said the government would not allow protesters to break the law by blocking election procedures.

Charupong, Pheu Thai Party leader, said he had been informed that protesters would be trucked from the South to Bangkok to block registration by party-list candidates.

Meanwhile, the interim government yesterday approved a Bt3.885-billion budget for the election.

Chalitrat Chandrubeksa, deputy government spokesman, said that to ensure transparency, international organisations and media would be invited to observe the nationwide poll.

Caretaker Prime Minister Yingluck Shinawatra yesterday declared she would not yield to the PDRC demands that she step down.

In another development, the opposition Democrat Party had yet to resolve whether to contest the election, although it completed the appointment of a new executive committee. Abhisit Vejjajiva was reappointed as the party’s leader.

The decision will be made by the former and current board, by this week.

Several former Democrat MPs said their party could not take a position on the election quickly because it was a very important issue for the party.

“If we announced that we were ready to [participate in] the election, we would lose credibility with many people at the rally sites. Yet it would have a bad effect on the people’s movement,” one of the sources said.

After yesterday’s Cabinet meeting, Yingluck embarked on a trip to the Northeast, starting with Buri Ram. The stated purpose of the visit is to inspect government work.

Although the schedule has been set for her visit to nine provinces – Buri Ram, Surin, Si Sa Ket, Yasothon, Roi Et, Maha Sarakham, Kalasin, Udon Thani, Nong Khai and Bueng Kan – between now and Sunday, the details of where she would go were kept secret, as was the case with last week’s tour.