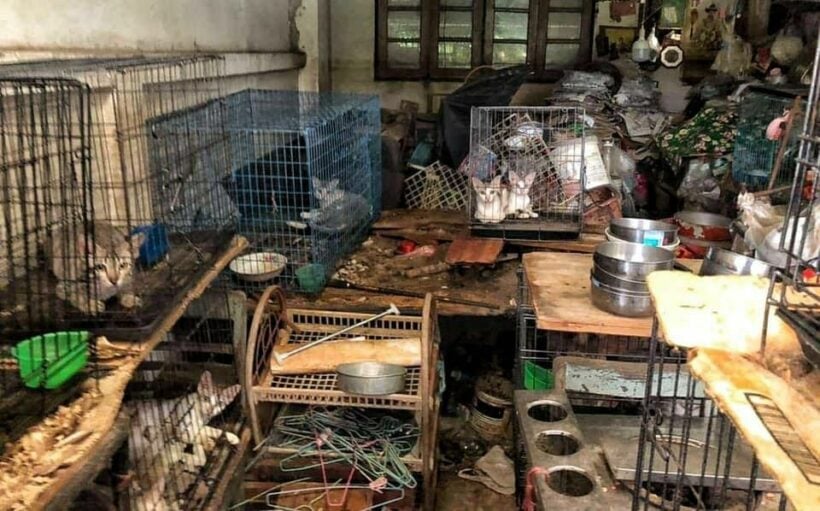 CORRECTION: An earlier report said another organisation rescued the cats. The correct organisation is the Save Elephant Foundation.

100 neglected cats were rescued from homes just north of Bangkok, many caged and kept in dark rooms piled with junk with poor ventilation. Dead cats were found under piles of trash and junk. 6 dogs were also kept in a small room, but 3 of them died. The rescue took days.

The Chiang Mai-based nonprofit Save Elephant Foundation says they had received a report about cats being held in small cages at 3 homes, but the situation was worse than they thought.

We didn’t expect it to be so bad. After our team went down to search and take pictures, we knew that many of the animals in those three buildings needed urgent help.

The organisation says it tried to negotiate with the homeowner before calling in local authorities for assistance. The Department of Livestock in Bangkok was called in and local police and volunteers helped confiscate the animals.

One cat, who escaped from its cage, hid in a pile of rubbish in the house. It was laborious trying to get the cat out of the tight cranny.

In the process of searching for this cat, we found numerous dead cats lying about or tucked into crevices in the garbage pile, some in cabinet drawers and others dried up and locked in their cages. As a cat lover I admit, it was a melancholy task – how hard was their suffering before their untimely end.

Thai media says the homeowner was an elderly woman. A neighbour who has lived in the area for over a decade told Thai media that she noticed an odour coming from the homes and asked the homeowner multiple times why she had so many cats, but the elderly woman would respond saying the cats weren’t hers.

To donate to cats rescued by the Save Elephant Foundation, click HERE.

weloveanimals
This is extremely misleading! It's Save Elephant Foundation who saved these poor cats!

King Cotton
3 hours ago, weloveanimals said: It's Save Elephant Foundation who saved these poor cats! A sad story, whoever it was that came to their rescue.   Hello weloveanimals and welcome to T-T!   Please feel free to tell us a…
TobyAndrews
They should lock this old hag in a small cage for five years and give her a taste. And don't fall that poor old lady routine. She a vile bitch who tortured animals.