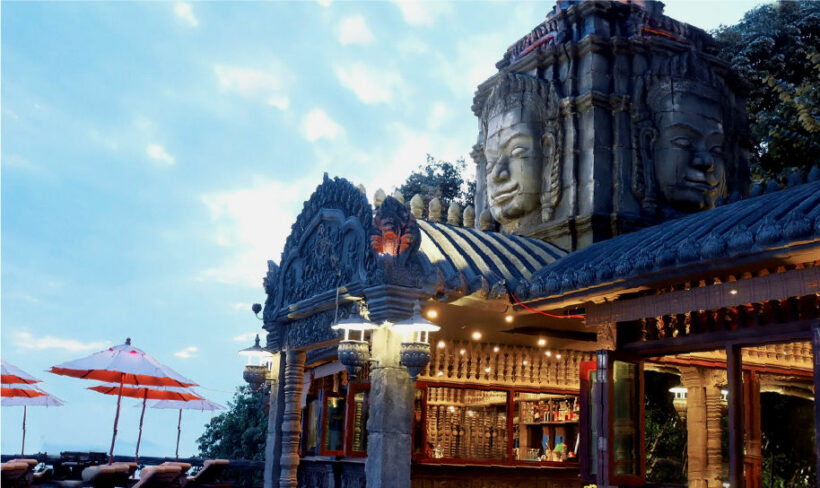 Cambodia’s Ministry of Culture and Fine Arts is also now reviewing the complaints about the hotel’s use of Cambodia’s ancient landmarks which also include UNESCO World Heritage Sites Bantaey Srey and Bayon Temple, the Khmer Times reports. Ministry spokesperson Long Punna Serivath says they will talk with the country’s Ministry of Foreign Affairs to determine whether the hotel’s use of Cambodia’s culture has an effect on the country’s economy.

“The temples of Angkor Wat and other UNESCO World Heritage Sites are cultural resources that we are obliged to help preserve and promote.”

The hotel overlooking the island’s popular Haad Rin beach, an area known for its raunchy Full Moon Party, first opened in 2014. The Bangkok Post says the hotel is owned by a Cambodian couple. The hotel advertises temple-inspired rooms like the “Angkor Rooms,” saying in a description that the “Angkor Wat is the most valued and admired of the Khmer Empire, The Palace of the King.”

The Angkor Wat in Cambodia’s Siem Reap province is the most renowned temple in the country. It is featured on the country’s national flag and it was deemed a UNESCO World Heritage Site in 1992. The temple is part of the Angkor Archaeological Park with ruins dating back to the 9th and 15th centuries.

Cambodia’s Khmer Times reported the outrage and criticism over the Koh Phangan hotel’s use of Cambodia’s culture for commercial purposes. Here’s what some netizens said, according to the Khmer Times:

“Angkor Wat is the property of Khmer people. It is not right that a foreign country steals our culture”.

“This is the brand of Khmer, Thai must ask for permission from Khmer.”

“It’s really sad, a thief has stolen the culture of Khmer heritage”

The Le Palais Hotel wrote a post on Facebook apologising for the building’s design, saying they are “extremely sorry for the frustration this has caused you and would like to clarify the vision from our founder’s heart and intention.” They say the hotel’s design was inspired by the “greatness” of the Angkor Wat and that Cambodia is the “motherland” of Thailand’s founder.

“We launched the hotel humbly only for the admiration, appreciation and passion for the magnificent art. The construction, decoration here were handmade and heart-made by Thai and Cambodian teamwork. Nonetheless the greatness will always remain to the great Angkor Wat and will never be compared.”

President of the Tourism Association of Koh Phangan Vichai Khongmun says the hotel complies with building regulations, adding that Angkor Wat design might encourage tourists to visit the real place.

Please accept our heartfelt apologies..We are extremely sorry for the frustration this has caused you and would like…