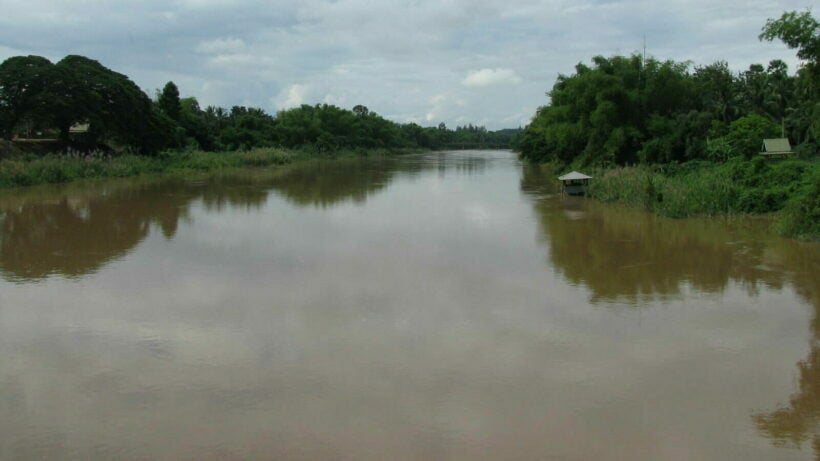 An elderly man and his kitchen tumbled into a river this morning when a riverbank the house was built over collapsed. Rescue workers rushed to the Ban Wang Ped village in northern Thailand’s Phitsanulok province to help rescue the man who was struggling to stay above water. The wreckage of the kitchen made it difficult for the man to extract himself from the Yom River.

When the kitchen crumbled, Khua Meeyaem, the septuagenarian homeowner found his legs trapped under a slab of concrete. Locals assisted the rescue team in saving Khua from his house turned potentially watery tomb. The muddiness of the water made the rescue harder to pull off. Rescuers used an iron bar to help lift the slab off Khua’s legs. Then, after an hour of strenuous work, Khua was freed from the river. He had suffered injuries to his leg and was exhausted by the ordeal. He was subsequently rushed to a hospital.

Khua’s wife, 82 year old Luan Meeyaem, says the region was struck by heavy rain overnight. She says she got up around 5am to cook food for monks. While she waited in front of her house for the monks, she noticed her husband had failed to join her. She checked the bedroom but didn’t see her husband. She then went to the back of the house where the kitchen was located. It was then that she noticed the kitchen had plunged into the Yom River.

With tears in her eyes, Luan recounted how her husband was calling out for help from the wreckage. She then dashed to get help for Khua. Deputy chief of Bang Rakam district, Tharadol Apijaree, warned other residents that live along the river that heavy rain will probably come to the area again and they should be alert to landslides. He instructed officials to help people move their belongings from houses that were deemed at risk.

DoUKnowWhoIAm
I suppose they didn't have a floating kitchen island then?

Bluesofa
1 hour ago, Thaiger said: Rescue workers rushed to the Ban Wang Ped village in northern Thailand’s Phitsanulok province to help rescue the man who was struggling to stay above water. I'm afraid 'I scream float' is the only food…