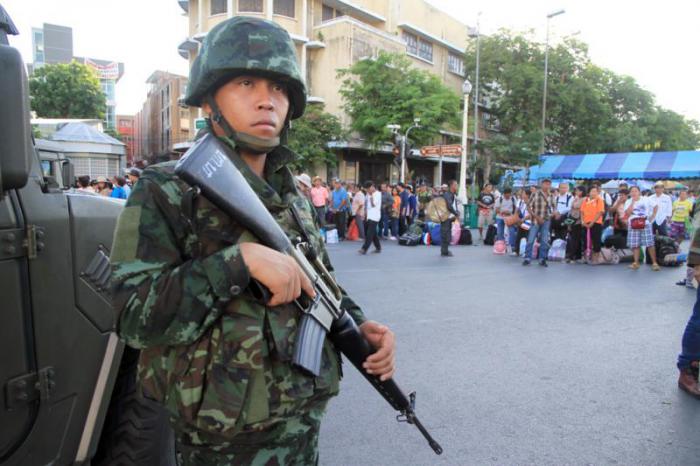 PHUKET: Army chief General Prayuth Chan-ocha will be given a royal command, appointing him as the head of the NCPO, and a ceremony will be held at 10.49am today at the Royal Thai Army headquarters on Rajdamnoen Road.

A press conference will be held later to announce the NCPO’s roadmap and the likely set-up of a national legislative assembly to push ahead with a new constitution and a national council for reforms.

The move follows the National Council for Peace and Order (NCPO) yesterday announcing that, in order to tighten security, any offence against the monarchy and national security would face prosecution in military courts.

The offences are those cited in Articles 107-112 of the constitution and include lese majeste.

Articles 113-118 cite other security offences, including talk of secession and insurrection.

Any violation of the NCPO’s orders would also be tried in military courts.

NCPO order No 37 exempts offences committed in areas where the Internal Security Act and the emergency decree are in effect from being tried in military courts. In such cases, the offences would go through the normal judicial process.

Academics allied with the anti-Thaksin protesters, including Suraphol Nitikraipot, the former rector of Thammasat University, and critic Thirayuth Boonmee, as well as the Banjerd Singkaneti, the dean of the Faculty of Law at the National Institute of Development Administration, were also summoned.

The NCPO said it would take legal action against Thaksin Shinawatra’s lawyer Robert Amsterdam over his interview to the foreign press, in which he said some states had offered to Thaksin to host a government in exile, Army deputy spokesman Colonel Winthai Suvari said.

The content of the interview was deemed as disturbing the peace in Thailand, so the NCPO would ask the Foreign Ministry to cut the lawyer’s communication channels, he said.

Meanwhile, key community figures summoned for talks by the coup-makers have not been tortured and will not be detained more than seven days, NCPO spokesman Col Winthai said.

However, the period of detention would depend on the degree of importance of the individuals and the information they had to give, he added.

Winthai said the NCPO had summoned leading individuals from all sides of the political spectrum to inform them about the current situation.

Many of the summoned figures were detained but the military said they were being treated well and would be released in a few days when the situation had calmed down.

“They are not chained or tortured. We treat all of them with honour,” Winthai said. “We have informed them of the need for cooperation to help solve the country’s problems.”

Winthai said many of the summoned persons had been released and some were freed on the first day. He said if detainees were wanted on arrest warrants, they would be handed over to police for further prosecution, which would begin tomorrow.

Regarding summoning the Shinawatra family, Winthai said that the name of Khunying Potjaman na Pombejra, the ex-wife of Thaksin, was on an unofficial list. The spokesman said he still did not have information as to when former prime minister Yingluck Shinawatra would be released, and he did not know whether NCPO chief General Prayuth would hold talks with Thaksin.

Thaksin yesterday wrote on his Twitter microblogging page that the NCPO must return happiness to Thais.

He said he was sad that another coup had happened in the Kingdom and added that conflicts in the country stemmed from divisiveness and the lack of fair rules.

The NCPO spokesman said Panthongtae was staying in Chiang Mai when he was summoned for talks with officials “to set aright his understanding”. Later he was taken to his Bangkok residence “in line with his wishes”.

People who reported to the NCPO at the Army’s auditorium in the Thewes area yesterday morning were transported to an unidentified military camp around 3pm.

They include The Nation‘s senior reporter Pravit Rojanaphruk, Bonanza Khaoyai Resort owner Paiwong Taechanarong, and Pheu Thai legal expert Pichit Chuen-ban. Kanchanapa Honghern, secretary to Potjaman, who was among those summoned, sent a representative to inform the NCPO that she had been receiving treatment in a hospital.