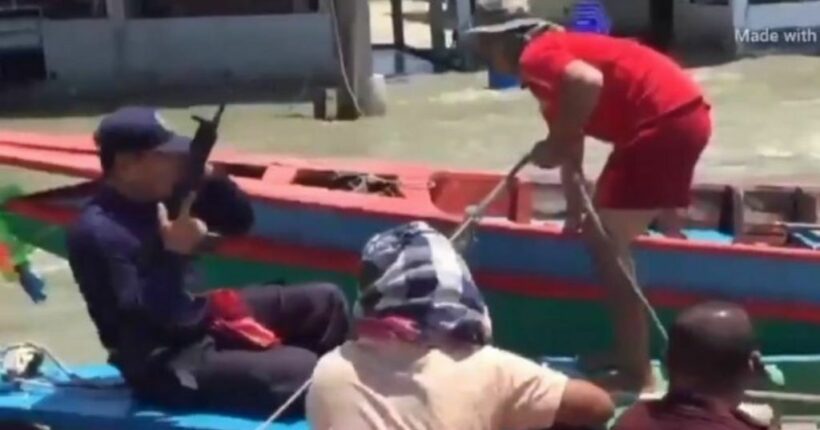 Four fishermen involved in a clash with authorities back in 2019, where fishers ganged up to against officers to release a suspect and a boat full of shellfish the officers seized, have been sentenced to a year in jail. The fishermen were found guilty of operating a cockle farm illegally and violently threatening officers which led to the escape of a suspect.

The local fishers were harvesting shellfish illegally in the southern province Nakhon Si Thammarat. Reports in Thai media say the fishers had support from an “influential person” in the province who supported the illegal acitivites.

A few years ago, the coastal areas in the south along the Gulf of Thailand had a problem with cockle farmers illegally occupying large areas of bays, which were under public domain. So-called “influential figures” had reportedly laid claim to areas of the sea and then leased or “sold” them to people eager to invest in the profitable shellfish trade. Sometimes violent disputes between cockle farmers and local small-boat fishers who would raid the illegal farms became known as the “Cockle Wars.”

Back in October 2019, officers seized a small boat full of shellfish and detained a fisherman, but the officers were confronted by around five other wooden boats full of local fishers who ganged up to take back their boat and shellfish, as well as free the detained fisherman. (See video posted by Thairath below.)

Arrest warrants were issued for four fishers featured clearly in the video. After two years of questioning and investigating, the Nakhon Si Thammarat court ruled that the four suspects had to spend one year and six months in jail. The sentence reduced to a year in prison because they all confessed and their information was helpful to the authorities.

The authorities say they deal with illegal shellfish farms every day. Some “influential people” and politicians supported and encouraged the local fishers to continue their unlawful activities. The authorities also admitted that cracking down on illegal cockle farming is difficult work. a3tsw
So , the fishers are off to jail for a year , but no action taken against the "influential person" behind the whole scheme.