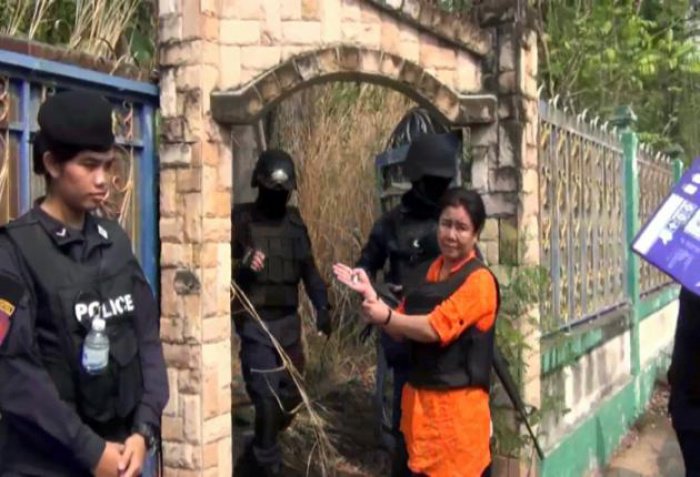 PHUKET: Police will have doctors to re-examine four of the suspects allegedly involved in the hand-grenade attack on the Criminal Court following allegations of physical assault and torture to obtain confessions.

Police spokesperson Lt Gen Prawut Thavornsiri said doctors had examined the suspects when the military had turned them over to police investigators after a week of detention under martial law. Police were checking to see if the doctors found any evidence of torture.

But Gen Prawut said that if complaints of mistreatment were made while a suspect was in prison then another examination would be conducted.

However, he insisted that all four suspects were in good mental condition when they were handed over although according to normal procedures no examination of the skin was conducted, with the focus on blood pressure, heart-beat rate, and not whether any wounds on the body could have occurred before or after they were placed in military custody.

The move for a second examination comes after the Thai Human Rights Lawyers submitted a letter to the warden of Bangkok Remand Prison requesting an independent medical examination to be conducted on the suspects to verify an allegation of torture while under military custody.

The TLHR distributed photos on what it alleged was evidence that Sansern Sriounruen had been tortured.

Pawinee Chumsri, a pro-bono human rights lawyer for Sansern Sriounruen, one of the grenade-attack suspects, said she and her colleagues have submitted a letter to the Aryut Sinthoppan warden of Bangkok Remand Prison on Wednesday making the request in hope that physical examination would reveal the truth about the torture allegations made by Mr Sansern.

National Human Rights Commission member Niran Pitakwatchara said yesterday that the commission had received a complaint on the matter and would examine the suspects next week.

He said all the suspects must be considered innocent until found guilty in a court of law and must not be subjected to torture. Anyone found guilty of doing so would be in breach of Article 225-226 of the Penal Code.

Mr Sansern told reporters that he had been tortured, including electric shock around 40 times, being kicked in the head and suffering other forms of assault, to force a confession from him under military detention but he had refused to confess.

He said there were visible traces of ill-treatment. He was in military custody from March 9 to 14.

“We are concerned that torture may have taken place,” said Ms Pawinee, adding that three other suspects had also claimed to have been either assaulted or tortured.

‘No traces of torture’

Prison warden Mr Aryut said a primary examination on six suspects, including Mr Sansern, revealed no traces of torture. The other five suspects include Mahahin Khunthong, who allegedly drove the motorbike used in the attack, and the alleged hand-grenade thrower Yutthana Yenphinyo.

National Council for Peace and Order (NCPO) spokesman Col Winthai Suvari denied that there had been any torture of the suspects by the military and accused the TLHR of undermining the credibility of the officers overseeing the suspects’ military detention.

“I am confident that there’s no reason for the officers to coerce,” said Col Winthai, adding that the NCPO was acting under international norms and police were taking action on the allegations.

He said the rights lawyers group should have cross-checked the facts before making the allegation.

In a related development, key grenade-attack suspect Suphaphorn Mit-arak was taken by police by helicopter to Mukdahan, her home province, to re-enact her alleged crimes. He has been charged with terrorism and other offences.

Ms Suphaphorn allegedly helped plot the attack from her home and transferred the money to the alleged attackers, Mahahin and Yutthana.

Ms Suphaphorn was later taken back to Bangkok for further interrogation after staging the re-enactment at six spots in the province, including at Kasikorn Bank’s Mukdahan branch where she allegedly withdrew the money used to hire the attackers.

Another re-enactment was conducted at Ms Suphaphorn’s home, where she allegedly handed over money to another accomplice.

Police are searching for other suspects, while the military will turn over two more suspects, including self-proclaimed bomb-maker Suraphol Iamsuwan, to police today.

Gen Prawut said the alleged mastermind of the attacks, Manoon “Anek” Chaichana, may no longer be in the United States and police were coordinating with Interpol on the matter.