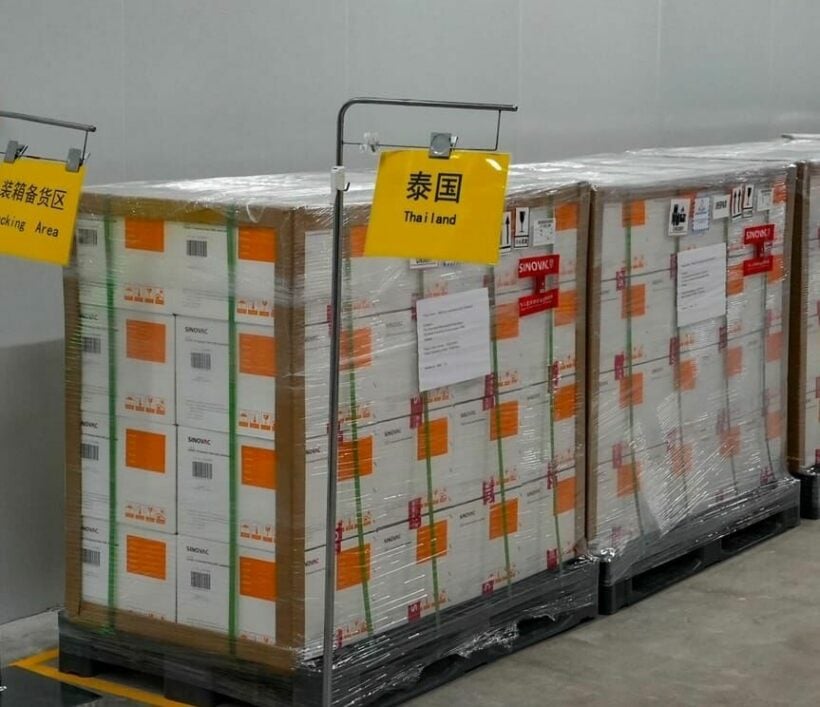 The first 200,000 doses of China’s Sinovac vaccine is set to arrive at Bangkok’s Suvarnabhumi Airport on Wednesday. PM Prayut Chan-o-cha is expected to formally accept the delivery at Thai Airways warehouse. Thai officials have made an event out of the first vaccine delivery, calling it “Covid vaccines, restoring the Thai Smile.”

The Chinese-made vaccine has yet to be approved by the Thai Food and Drug Administration. In earlier reports, Prayut said that the vaccines will undergo a 3-day inspection before the country’s immunisation campaign begins.

The vaccine manufacturer sent photos the shipment to the Thai government. Public Health Minister Anutin Charnvirakul posted a photo of the boxes stacked and packaged tightly, ready to be flown to Thailand. He says the rest of the 2 million doses the Thai government ordered from Sinovac will arrive by April.

The Thai Airways cargo aircraft is capable of storing goods at temperatures from 20 degrees Celsius below zero to 20 degrees Celsius. Chairperson of the airline’s board of directors Chaiyapruk Didyasarin says the vaccines will be stored at the correct temperature throughout the flight. He adds that a Thai Airways has also specially prepared a large air conditioned cargo areas to store the vaccines upon arrival.