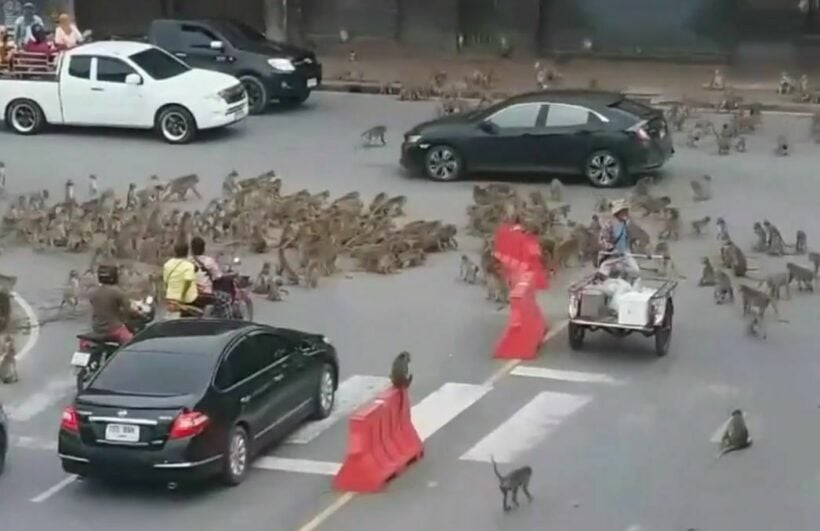 Hundreds of monkeys swarmed the streets in the Lop Buri in a massive fight, disrupting traffic on a busy intersection. It was another battle in what the Thai media dubs a “monkey war” believed to be between two rival groups of monkeys… the street monkeys and the temple monkeys.

Back in March of last year, hundreds of monkeys from the rival “gangs” brawled in the streets in the same area of Lop Buri just by the  Phra Prang Sam Yod, a popular tourist destination. The historic shrine has become known as the “monkey temple” as it is home to a large group of macaque monkeys. Each year, the province holds a festival offering a buffet of fruits and vegetables to the monkeys at the temple.

The province, around 150 kilometres north of Bangkok, is famous for its large macaque monkey population and local officials have attempted to control the population through mass sterilisation. While one group of monkeys occupies the shrine grounds, another group… or possibly more.. occupy the streets. They’re known to steal food and water bottles from people walking by. Just last week, one monkey was even caught sneaking into a woman’s home and stealing food from her refrigerator.

It’s unclear why the two monkey gangs clashed. In the past, some speculated that monkeys from one group may have encroached on the other’s “territory,” possibly due to the lack of food. Others guessed the monkeys could have been more aggressive due to the heat.

PapayaBokBok
9 hours ago, yetanother said: always carry a dog stick while on the bike; just strap it on the frame for quick grab and release Thai baton on my bike....quick SNAP and they rethink their plan...

TukTuk
Planet of the Apes, on a much smaller scale!