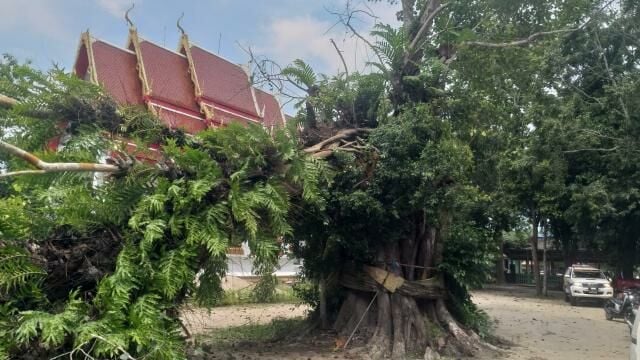 A 10 year old boy was crushed to death by a 100 year old banyan tree which fell down this morning at a temple in Nakhon Si Thammarat province, southern Thailand. The boy was sitting near the tree studying online when the incident happened. The boy sadly died instantly when the tree fell on him, crushing him underneath.

The boy’s relatives said that 10 year old Kraiwit Ketwichit went to the temple with his grandma to help out with work around the temple as usual. The grade 5 student sat down under a mangosteen tree near the banyan tree with his smartphone to study online when the 100 year old tree fell down and crushed him, killing him instantly.

A Buddhist monk witnessed the incident. 61 year old Phra Chaiyaphon Chayaphalo was sitting outside a monk’s hut when he heard the sound of a tree falling. He shouted to Kraiwit, telling him to move out of the way. The monk said the boy turned to look at him as if he was wondering what he needed to run from. In the same instant, the tree fell down on the young boy.

It is thought that heavy rainfall caused the banyan tree’s branches to soak up a lot of water, adding a lot extra weight and causing it to fall down this morning.

The boy’s body was taken by police for an autopsy to be carried out and will be returned to his family for religious ceremonies to be undertaken.

Ramanathan.P
Old trees has to be prune to avoid heavy load on them as the Heartwood could be prone to termite attack and hollow in the middle. Any such trees has to be cut down immediately. Normally Banyan trees have supporting…