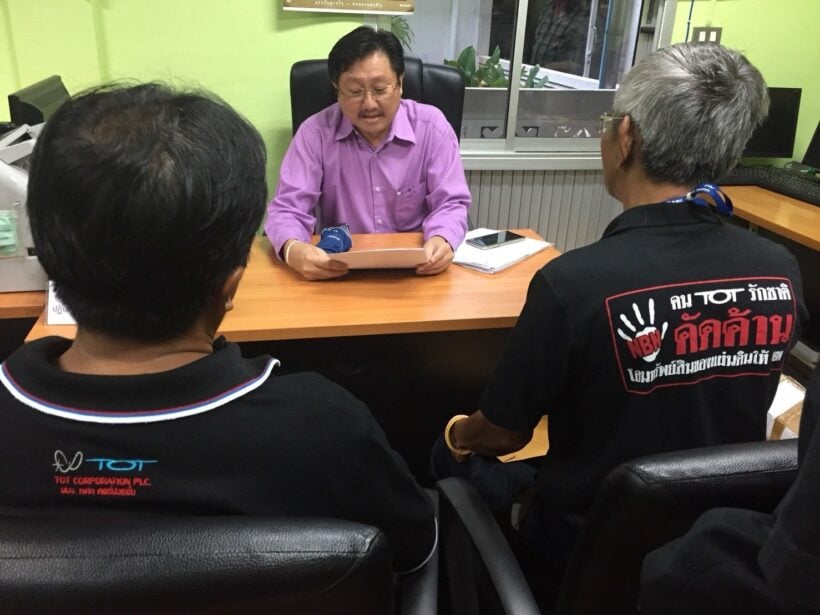 A complaint has been filed at the Damrongdhama Centre in the Phuket Provincial Hall today (May 24).

About 10 staff members of TOT Public Company Limited Phuket Office, led by Adireak Tipmongkol, filed a letter to the Thai prime minister. The letter requests the dismissal of Monchai Noosong, managing director of the TOT, from his position.

TOT is one of Thailand’s largest telecommunications companies.

Mr Adireak says, “we are receiving letters that will be handed to the Thai PM. Mr Monchai’s management has damaged the company. His management may have involved some illegal actions. His mismanagement could damage the company activities in Phuket.”

“We don’t want Mr Monchai to be managing director of the TOT. We don’t have any faith or confidence in his abilities to get us through our current financial crisis. So we are wearing black at all offices around the nation.”

Deputy Director of the Phuket Provincial Health Office received the letter and promised it would be sent to the Prime Minister’s office immediately.

(It was not apparent from our reporters what Mr Monchai is specifically being blamed for but the lack of confidence in his managerial ability were mentioned as the reason for the letter requesting his dismissal.)

Chiang Mai wakes up to floods this morning