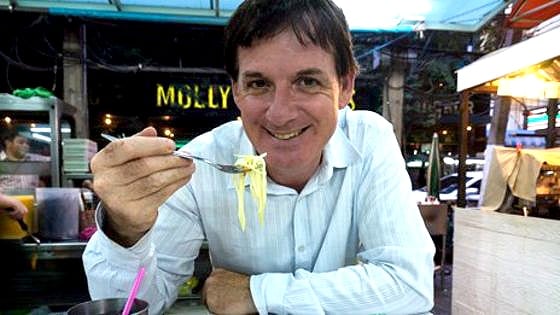 The Phuket lawyer, Pratuan Thanarak, who brought defamation charges against BBC broadcaster Jonathan Head, has dropped his criminal defamation suit. Head investigated foreigners being scammed of their retirement homes in Phuket in a 2015 BBC report.

Jonathan faced up to five years in jail over the charges. His report detailed how two foreign retirees had their properties ‘stolen’ from them by the alleged collaboration of lawyers and Phuket money-lenders.

Pratuan Thanarak decided to drop the charges against Head during the first day of the trial. In a short statement the BBC says “the plaintiff has withdrawn his case against BBC journalist Jonathan Head, but as the trial of his co-defendant is continuing we cannot comment further at present.”

As foreigners cannot own land in Thailand they have the option to get around the ownership laws by putting their interests under the trust of a Thai, often a partner or wife. The other option is setting up a majority Thai-owned company that ‘owns’ the property. Bottomline, the foreigner never really ‘owns’ the property (unless it’s a condominium where foreigners can own up to 49% of the units in the block).*

The 2015 BBC report features British national Ian Rance, a joint defendant in the case. As of the time of writing, he still faces a defamation charge and up to two years in jail if convicted. Rance claims he lost properties to the value of $1.2m after his wife and Phuket money-lenders forged property paperwork. Rance’s ex-wife is now serving four years in jail.

The BBC says it will continue to fund Ian Rance’s defamation defence. Both Pratuan and Rance have declined to comment when contacted by AFP saying that the proceedings are ongoing.

In 2015 local news portal Phuketwan closed down after funding a successful bid to defeat a suit brought by the Royal Thai Navy. Andrew Drummond, the Pattaya-based British crime reporter, left Thailand over multiple cases brought against him. British labour rights activist Andy Hall left late 2016 after a libel case against him was dismissed.

* Always seek professional legal advice and conduct due diligence when purchasing property in Thailand with qualified and properly accredited lawyers.