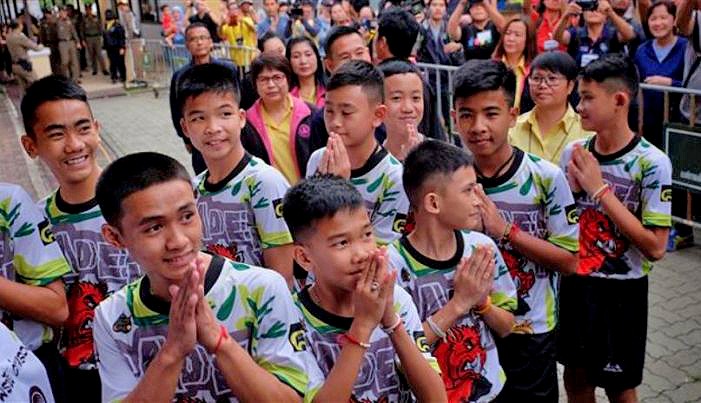 That’s the warning issued by the public relations office of Chiang Rai province after a correspondent of America’s ABC News conducted an interview with the youngest of the survivors from Tham Luang cave in defiance of advice of psychiatrists and child welfare officials. The film crew also visited the church for 14 year old Adul Sam-on where church members threw Adul a welcome home party.

Members of the Thai and foreign media have been asked not to interview any of the 12 Wild Boars young footballers or face legal that could lead to a six-month imprisonment and/or a fine of up to 60,000 baht.

The warning was issued by the public relations office of Chiang Rai province after a correspondent of ABC News had an interview with one of the survivors from Tham Luang cave in defiance of advice of psychiatrists and child welfare officials.

Chiang Rai deputy governor Somboon Sirivet said that the governor had instructed officials concerned in Mae Sai disttrict and the parents of the 12 young footballers to make sure that the boys are protected and that they should not give any interviews to the media.

Parents of the 12 boys went to Tham Luang cave today to attend a religious ceremony to pay respect and show gratitude to the what they believe to be spirits protecting the cave for the safe return of their children after being stranded deep inside the flooded cave for more than two weeks before they were safely rescued last week.

The Mu Pa 13, minus one, attend blessing ceremony before becoming novice monks

Seven arrested over a 300 kilogram ‘ice’ shipment in Chiang Rai