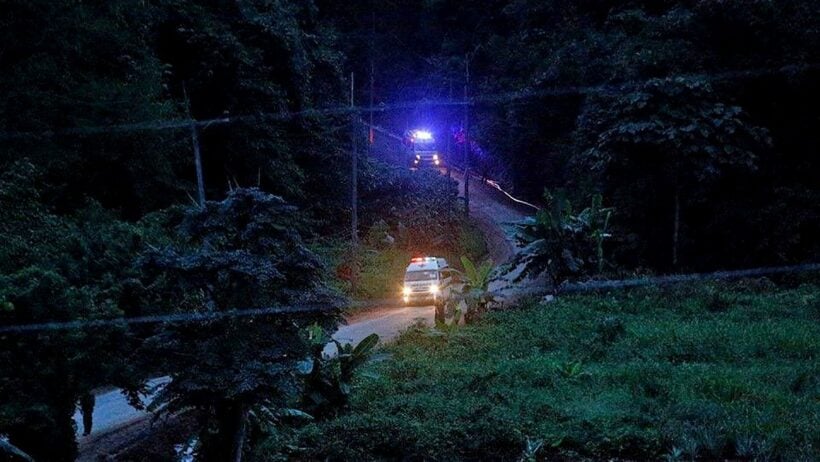 Four more of the teenage football team have emerged from the Tham Luang caves tonight, taken to a medivac tent for a quick examination then whisked away to the Chiang Rai hospital by helicopter.

It’s been day two of the risky rescue mission that was forced on officials by looming rain and possibilities of rising flood waters inside the caves plus a range of other potential problems if the team remained inside.

Just before 8pm, the last of the four of today’s group was evacuated from the caves. That’s four yesterday evening and another four today in an enormous international effort to bring the team of 13 safely out of the Tham Luang caves in Chiang Rai’s Mae Sai district, right near the Myanmar border in far north Thailand.

None of the team evacuated today has been identified. There has been no official announcement. Despite a media clamp-down today, and the military radio channels scrambled so they couldn’t be monitored, information of the rescues was still freely available to the assembled media.

The military have wanted to control the flow of information from the rescue site so that rumours and ‘chatter’ didn’t get reported.

There has been no report on the condition of the four evacuees today. One of last night’s team members was said to be in a ‘serious condition’ when he arrived at the cave entrance following his evacuation, but has since been described as ‘stable.’

More than 90 divers have been working together in the mammoth rescue operation. Each of the teenagers has been escorted by a pair of divers – one in front, one behind.

Thai PM Prayuth Chan-ocha is in Chiang Rai tonight to visit the rescue site. The media have been banned from following his tour. There has been no announcement about where he would be visiting during his evening visit.