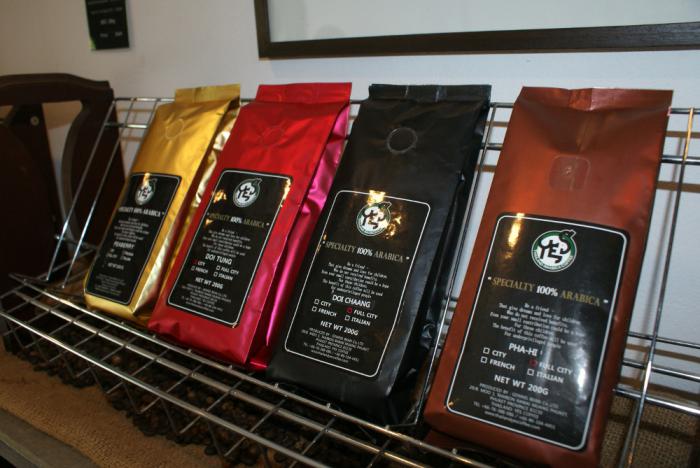 Coffee industry experts have long been calling on coffee producers in the kingdom to bring specialty coffee products to market and move away from supplying bulk beans to instant coffee manufacturers.

The high-quality beans are further graded by hand, with imperfect beans removed after they arrive from Northern Thailand. Photo: Mark Knowles

“Although Thailand’s coffee production remains low compared with other Asean countries such as Vietnam and Indonesia, Thailand has high potential to grow as the regional center for coffee, given the quality of Thai-grown coffee, production processes and the favorable geographical location,” Thai Coffee Association President Varri Sodprasert, told the media in an interview last year.

One locally based company, Yes Coffee, has heeded this call. From its new facility in Rawai, Yes Coffee is roasting and packaging premium coffee that is helping to strengthen Thailand’s rapidly growing reputation for having some of the finest-tasting coffee in the world.

The company was founded by Korean national Park Kyung Won, who has long been involved in Thailand’s latex industry before branching out into coffee. Mr Park later formed a partnership with American national Collin Fullilove, who formerly owned a coffee plantation in Guatemala and is helping to market the company’s specialty coffee products.

“Ten years ago, Mr Park went back to educate himself about the coffee industry, and he went on a long odyssey of seeking out plantations and educating owners about going organic,” said Mr Fullilove.

Now, a decade later, Yes Coffee has developed strong relationships with plantations in Northern Thailand and now transports two tons per month of green beans to Phuket for roasting and packaging.
“We buy directly from three separate plantations [in Northern Thailand]. They are all grade-A, certified organic,” said Mr Fullilove.

“Yes Coffee just came in second place in a competition testing all the coffees in Thailand, with our green beans,” he added.

The company currently supplies its coffee to several Phuket hotels, as well as souvenir shops aimed at international tourists. But their Phuket roasting operation is just the start of their push into the high-end retail coffee market. The company is currently in negotiations with Villa Market to supply premium coffee in all their stores.

“The people from Villa Market recently came for a tasting of our coffee and they loved us, because number one – we have arguably the best coffee in the world, and secondly – 10 per cent of everything we are making is going in to charity.”

There are also plans underway to open an outlet at Don Muang International Airport in Bangkok, which would serve as a flagship store for the brand and help to capture the lucrative international consumer market who are more educated about the qualities of premium coffee.

Yes Coffee is about more than coffee, on the grounds of their roasting factory and retail outlet in Rawai, they have built a free school to help educate the children of migrant workers from Myanmar.

Children from the school, which is run using 10 per cent of the profits from Yes Coffee’s operation. Photo: Mark Knowles

“We’ve been operational for about 18 months. The roasting factory was built in conjunction with the school and 10 per cent of all the profits we make go into [the school] charity,” said Mr Fullilove.

“These children have no access to education… they fall in the cracks, their parents work and they don’t have access to the Thai education system. So it’s an area of great need.”