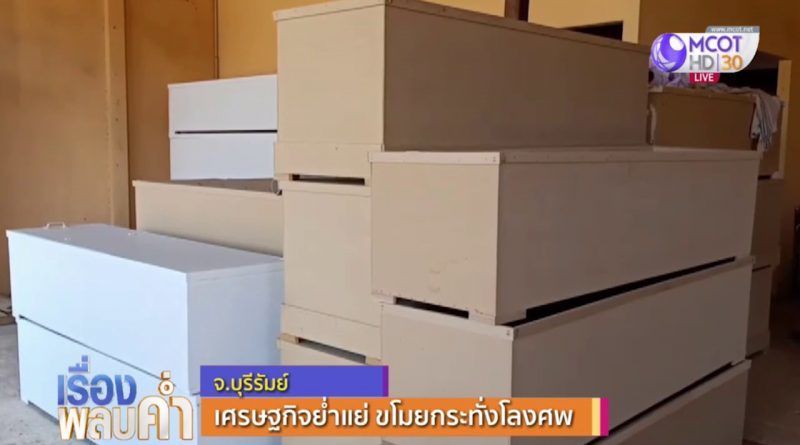 “A coffin maker, who supplies Jamnong, says the store is left open at night, often with no staff in attendance.”

The kind-hearted owner of a coffin shop in Buriram, north-east Thailand, has admitted he regularly has to deal with coffins being stolen from his premises, but can’t bring himself to file police reports against the perpetrators, as he feels they must be dealing with financial hardship while grieving.

Thai Residents reports that the 50 year old store owner, named as Jamnong, says the theft of his coffins is a regular occurrence, but that it’s usually only the cheaper options, priced at 600 – 800 baht, that are taken. Up until now, he’s turned a blind eye to it out of sympathy.

However, the latest theft involved a significantly more expensive coffin, which was priced at 4,500 baht and Jamnong wonders if this one was stolen for its resale value as opposed to being needed by a grieving family.

Despite this, he still wasn’t able to bring himself to file a police report, saying if the coffin is truly needed, he’s happy to give it away. He also points out that he doesn’t mind if people come to him directly and ask for a free coffin or a discount, if they’re unable to pay the full price.

Jamnong says he would like the coffin thieves to think about the repercussions of their actions, as each theft costs him money. He has been unable to make any profit as a result of the thefts and says he now has no choice but to install CCTV at his shop.

He says he’s prepared to report the next theft to police and to press charges, particularly if he suspects a coffin is being stolen to be resold, as opposed to being genuinely needed by someone who can’t afford to pay for it.

A coffin maker, who supplies Jamnong, says the store is left open at night, often with no staff in attendance. The general understanding is that customers taking a coffin will call the phone number displayed at the front of the store to arrange payment at a later stage, but lately this agreement is being ignored as people abuse the store owner’s trust.