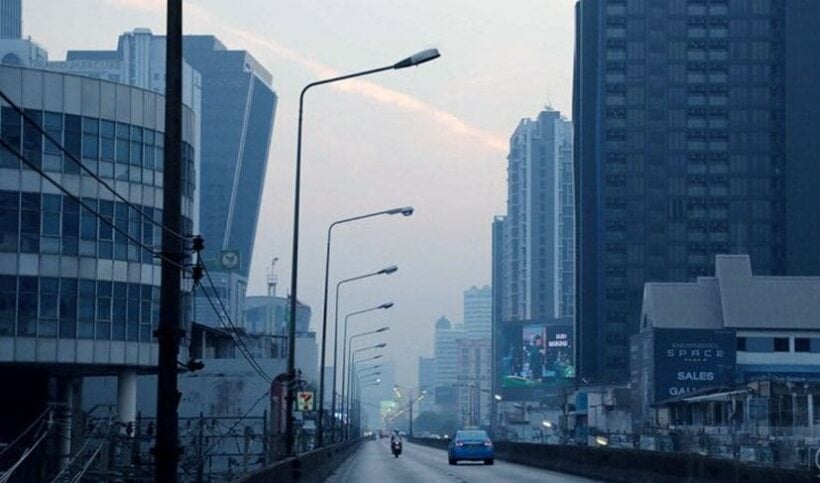 PHOTO: An eerie start to Sunday in Bangkok – The Nation

Bangkok’s air pollution has reached dangerous levels for multiple days in the past few weeks.

Today, air pollution in the greater Bangkok area was again threatening residents’ health. The amount of PM2.5 – airborne dust particles 2.5 microns in diameter or less – exceeded the safe level of 50 micrograms per cubic metre of air along roads in 19 places.

The Bangkok Metropolitan Administration instructed district offices to clean roads every day and spray water in the air to curb dust. Operators of construction sites were told to prevent dust from spreading.

The Royal Rain-making and Agricultural Aviation Department are being approached to be ready to carry out cloud seeding once the weather is suitable for the operation to help ease the worsening air pollution in and around Bangkok.

Bangkok Metropolitan Administration, meanwhile, has reportedly ordered all the district offices in the city to clean up roads on daily basis and, at the same time, to send water trucks to spray water into the air to reduce fine dust particles and to strictly check car emissions and construction sites.

Blaming close weather with cloudy sky, morning fog and stale air, the Pollution Control Department reported today that air quality in 19 areas close to the roads is health threatening with the amount of PM2.5 dust particles ranging from 63-96 microgram/cubic metre against the standard level of 50 mg/cum.

Air pollution levels in some of the 19 roadside areas are between 71 and 92 mg/cum.

The World Health Organisation estimates that 7 million people die every year because of exposure to both outdoor and household air pollution. In 2013 it classified PM2.5 as a carcinogen, noting that the tiny particles easily enter the respiratory system and blood vessels to cause harm.